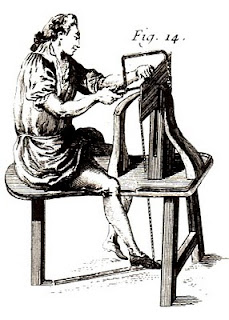 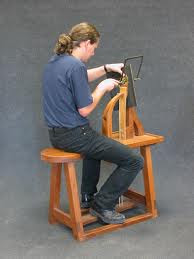 When I started restoring antiques, I was not alone. There was a large, popular movement to collect and restore antiques during the 60's and 70's which supported a lot of competition. I wanted to do projects which were unusual, complicated and required a higher degree of skill, so I could charge more money, and get all the jobs the others walked away from.

I soon discovered that most woodworkers avoided veneer in general and marquetry in particular. Since I was working with traditional hot protein glues, and had sources for high quality veneers, I studied everything I could find on the subject. Most of the books in English were full of bad advice. It seems that these books were written by authors who had only read other books written by authors who had no practical experience, and were simply passing on bad information. Since I was learning by experience, my experiments with glue, veneer and inlay taught me to avoid believing what I read.

Two of the books I thought were accurate were written in the 18th century by French authors: Diderot and Roubo. Both books contained illustrations of early woodworking trades and tools, including marquetry. In one illustration a worker is shown sitting on a bench, with a foot operated vice, cutting marquetry packets with a hand held fret saw. I was fascinated. I immediately purchased an American harness makers bench in Nebraska, and modified it to work exactly as the illustration showed.

You can see me trying to cut on this tool above. I also include a picture of my good friend, Yannick Chastang, working on his replica of the same tool. He is living in England, and is a graduate of ecole Boulle, and was, for many years, the furniture conservator at the Wallace Collection.

It was difficult to work properly. The biggest problem was holding the saw perpendicular, and the jaws had a shallow throat, making it impossible to execute larger projects. This was in 1975. That year the Getty museum opened to the public in Malibu, and I was practically the first person in line to get in. I soon met the young French man, hired to conserve the collection, and we became friends. He invited me to his home, where he had a complete woodworking shop in his garage.

Unlike most American woodworkers, his workshop had no power tools, and a large bench stood in the center of the room, with a wall of hand tools and several nice, expensive and early restoration projects sitting nearby under sheets.

We both shared a passion for racing bicycles, and I owned several expensive custom frames, which I offered to bring the next visit for him to try. During one of his rides on my bike, I lifted the sheet on one of the objects, fully expecting to see some nice early cabinet. What I saw was an amazing tool: the chevalet de marqueterie. I instantly recognized it, and realized it had a saw and arm support system which was not illustrated in the early French books. Problem solved.

The next thing I know, a cabinet shop in Hollywood contacted me to see if I could make a marquetry top for a dining table commission. It seems that they had not found any worker in Los Angeles who was able to do the work, and someone had mentioned me. At that time, the largest marquetry project I had completed was about one square foot, using my primitive, modified harness maker's bench. This job was 4' x 15' in size, an area of 60 square feet!

Without any hesitation, I proposed delivering the top for $6000 (1976 dollars). I immediately built my first chevalet and a large manual veneer press and, after 300 hours, was driving to LA with a 15' marquetry table top hanging out of the back of the truck.

The lessons I learned on that project are another story.

What were the cycling frames you mentioned?

From 1963 to 1980 I had several custom racing frames made, for each activity: road racing, touring, tandem, criterium, time trial, track madison, track sprint, track pursuit, etc. Names like Rene Hearse, Albert Eisentraut, Masi, Bianchi, and most importantly, several by Mario Confente. In fact, Mario died at a very young age (31) the week after I had ordered a frame and I was depressed for months. He was a true genius and during his short career after he left Masi, he produced fewer than 200 frames total. I owned four.