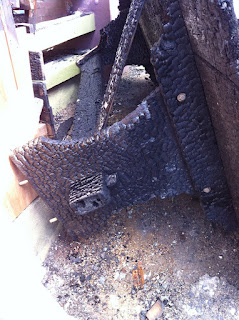 Last September I posted an entry here about an elderly lady who lives in a historic Craftsman house just a few blocks from the shop. I mentioned that her entire house went up in flames (actually it exploded) when some very stupid refinishers tried to strip all the woodwork with the windows and doors closed and the water heater turned on. She was lucky to get out alive.

At that time she had a very large pine table which had been made in New York some 50 years ago. It wasn't an antique, and it wasn't particularly well made, but I had been hired by her previously to refinish it with a more "authentic" finish than the yellow lacquer.

She had a particular attachment to that table, since it had been made for one of her dear friends who had a large family, and it brought back good memories of her past. Although it was very large, it was one of the few items in the house that the brave fire fighters actually moved outside while fighting the fire.

When I saw the smoke from the fire, while standing in the front door of my workshop, I rushed over to see which house was burning. Imagine my surprise when I arrived to see that table sitting on the lawn, smoldering. Naturally it was beyond saving. 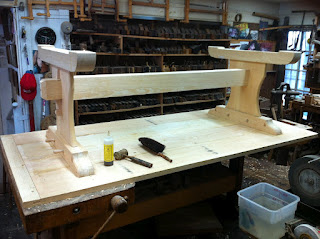 Fortunately, this lady had good insurance, and the strong determination to not only rebuild, but to restore the home exactly as it was built in 1926. She found some experienced contractors and supervised every step of the job, fighting the city code during the entire process. She moves in to the "new" historic house next month.

Since all of her antique furnishings were lost, she has been collecting replacements. That is why she came back to me to rebuild the pine dining table. I don't usually work in pine, but it is a change of pace to just do "timber framing" and "rough" hand planing. Where the original table was held together with dowels and bolts, this version is strictly traditional: wedges, pins and mortise and tenon construction.

The top is the same size as the first table, 4 feet by 8 feet. It fits well on the top of my bench. Tomorrow I start the process of finishing it and by next week she should have the table sitting on her new hardwood floor in the dining room.

I don't think she will have the woodwork in the house stripped again.
Posted by W. Patrick Edwards at 9:40 AM 3 comments: