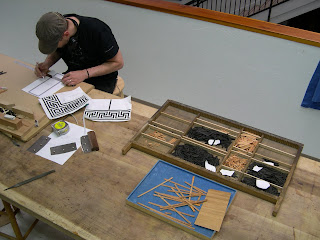 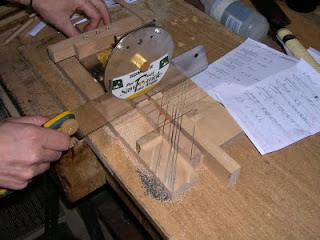 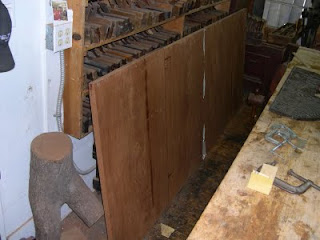 We are building a large Italian Empire Dining table for a client, along with 8 chairs. The wood we are using is genuine Honduras mahogany, which was purchased over 35 years ago.

I clearly remember buying the wood. The lumber yard at that time was downtown, in a run down industrial district, near the harbor and on the railroad line. Today the same site is the location for a tourist attraction, Seaport Village. Where I remember walking dusty isles of rich hardwood lumber, now kids are buying candy and balloons and tourists are taking pictures of the palm trees by the water.

The reason I remember that particular purchase is that the good mahogany was kept on the second level, under the skylights. The trucks could pull up in the alley and you just slid the lumber from the stack down over the edge of the walkway onto the top of the lumber rack on the truck. On this particular day another truck was in the way, so I slid the boards down on the side, leaving them standing vertical against the rail.

There was some particularly wide and figured mahogany planks in the stack, and I picked out three that looked special. When I reached the ground and turned around to examine my selection, the image of such wonderful wood, nearly 30 inches wide, a full inch thick and over 16 feet in length took my breath away. I remember the price was less than $3 a foot, and I barely had enough money to pay for it, or I would have gotten more.

Needless to say, those trees are gone and the price on similar material today approaches $20 a foot.

This table project is using the last of those boards, and the top of the table, which is 1 meter wide by 2.5 meters long is made from one piece of wood, hand planed and jointed. The picture shows it laying on its side next to my bench, waiting for the greek key banding around the top to be finished.

We needed to produce 7 meters of a complicated Greek key in sawn ebony and mahogany for the band, so we purchased a saw guide for the japanese saw that allowed us to make the elements. A total of 1,696 elements were needed to make the pattern, and the parts are sorted into a tray for assembly. We are making the band using hot glue and Kraft paper on an assembly board. One of the photos shows Patrice working with the tray, checking the design. The elements must be cut to a very high degree of accuracy or the pattern will change over the length of the table.

The use of the saw guide as well as the japanese saw made this part of the project much more efficient, and all the parts were cut out in one day. There was a lot more time spent in design and material preparation, but when it came time to saw everything worked well. Spacers were used on the jig to adjust the length of the part, and the angles were either 45 or 90 degrees.

I will let you know more about this project as we put it together.

PS: The Greek key pattern is the same pattern as you see in the Senate chambers in Congress.

PS2: Note the special veneer saw with different blades in the first photo. This saw is being manufactured by Gramercy Tools and distributed by Tools For Working Wood. It is a wonderful design and I will discuss it more later. See the link posted on this site.
Posted by W. Patrick Edwards at 12:39 PM 4 comments: 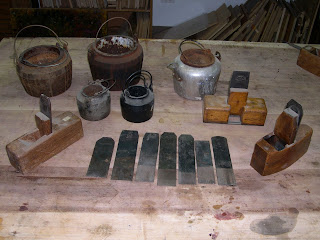 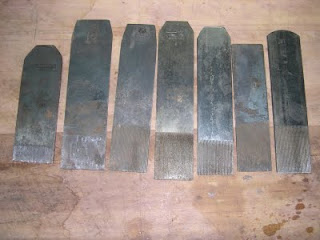 I started the American School of French Marquetry to introduce woodworkers (who were not fortunate enough to have been born in France) to a tool that is amazing: the chevalet de marqueterie. Unfortunately, the British translated the name to "donkey" and the aversion to the tool has persisted for centuries. I say, unfortunately, since I think the chevalet is the neatest tool since the one made to slice bread.

In my 40+ years of collecting woodworking tools (that do not require electricity), I think I have read most of the books and visited many of the sales and collections, so that I can usually recognize what a tool is designed to do. Sometimes I find a special purpose plane or tool which becomes the subject of speculation, as it might not be obvious to the first glance what it does. One of the fun pastimes for tool collectors is to share such tools among themselves to create intelligent speculation and form opinions, often not even close to the actual truth.

This has been going on for years.

One of my favorite books is the 50th anniversary publication of "The Chronicle of the Early American Industries Association", volumes 12-26, March, 1959 to December, 1973. It is nearly 1000 pages in one book which comprises all the newsletters of EAIA during those years. It is very interesting to read the questions raised and follow the responses during the following issues, as members add to the collective knowledge of some obscure aspect of the trades.

I noticed early in reading this book a question about a toothing plane. Something like "what is the purpose?" As I followed the train of thought through pages and pages of information, it became clear to me that the toothing plane was a common tool that had lost its importance in the trade by the middle of the 20th century. So I immediately started collecting toothing planes.

I found out a lot about the tool, some of which I discovered through research, some from European masters and some from direct experience. One of the first things I was told was the toothing plane proved the "truth" of the work. By that I mean that when you hand surface wood, and then veneer it, you need to know it is flat. Any imperfections created by hand planing will be transmitted through the veneer, as the hot glue cures and pulls down the veneer tightly onto the surface. By running the toothing plane at an angle to the grain, first in one direction and then in the opposite direction, you create a cross hatching of tooth marks which will not appear on any slight depression. Therefore, an even pattern of tooth marks on the entire surface proves it is flat, or the "truth" of your work.

In researching early veneer methods in France, I learned that before 1800 all veneer was sawn by hand from logs. This process left rather rough saw marks on the veneer and the material was obviously thick, about 3-4mm. Such veneer would be hard to bend onto the shapes of the furniture made during the Baroque and Rococo periods. Therefore, a toothing plane was developed, with rather fine teeth, to work the veneer, removing the saw marks and making the veneer thinner without creating tearout. The toothing plane has a steep angle to the blade, between 85-100 degrees, like a scraper.

Another plane with much larger teeth was made for the carcase. Usually the carcase was made of oak or beech and hand surfaced, so it needed to be toothed to guarantee a flat surface.

After 1800 the French created a mechanical saw which made veneer much neater, usually 1.2-2mm in thickness, and with regular saw marks. Therefore the toothing plane with the fine teeth was no longer necessary, but the other plane remained in the shop for the carcase. As steam power became popular, slicing veneer machinery replaced the saw (except in France) and the use of power tools in general made toothing unnecessary. However, in traditional workshops where hot glue was used, evidence of toothing plane marks remained until the middle 20th century.

The survival of the toothing plane is due to other reasons it was used. It creates a larger glue surface area. It reduces the chance of glue starvation when the joint is under pressure. It removes dirt, old glue, and oxidation, creating a fresh wood surface. It is essential in applying rubbed glue joints and hammer veneering. Most importantly, when the surface is hand planed, it proves the ""truth" of the work. 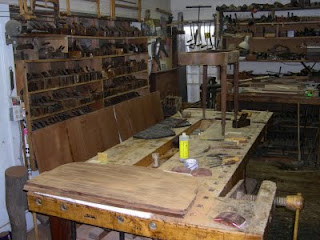 You may have noticed that the last few months I have neglected posting on my blog. I have been working on projects and busy with my diverse (volunteer) civic activities, and just didn't have the surplus creative energy to sit down and write something. So today, I just sat down and decided to start contributing again.

I am amazed at the stats for this blog, even though I have not posted anything for some time, I still get thousands of visits each month. I am encouraged and flattered that others think my blog has value. I am motivated to continue, and I have new topics to discuss which will expand the focus of this site. I want to talk about traditional period upholstery conservation and the philosophy of non interventive upholstery which has become all too acceptable in museums today. I also want to talk about developing and marketing my Old Brown Glue, which has become very much in demand over the past decade.

I also intend on discussing the issue of authenticating antique furniture. I am presenting my annual lecture at the University of California at Irvine, in association with the American Society of Appraisers, in June and my mind is full of talking points which are of value to both furniture conservators and collectors.

I value comments and would appreciate any input from you, dear reader. Please send me questions or comments and I will direct the content of this blog in that direction. I am more interested in having a conversation than just hearing myself think.

So, every few days now I will sit down and work on this site. But right now I need to finish restoring the nice Boston Sheraton mahogany card table which stands on the bench.

Thank you for your interest.
Posted by W. Patrick Edwards at 10:24 AM 2 comments: