When Is An Antique Fake? 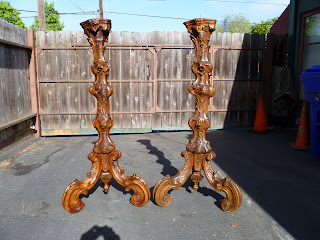 In a few weeks I will be presenting my annual lecture at the University of California at Irvine, in association with senior ASA appraiser, Nancy Martin. We have done this for several years, and the goal is to assist aspiring appraisers in analyzing antiques for condition and authenticity.

I take a truck full of pieces and parts to point out details that make the forensics of furniture fraud into a practical science. Wood analysis, hardware evidence, style, form and function, historical periods and revivalism, popularity of fakes during different eras, and, most importantly, the tool marks left by the process of fabrication all must be considered when deciding how old something actually is.

The economics of fraud play an important factor in the popularity of fakes. If something takes a lot of work and skill to make, and the market does not support the value of the original then it is not likely someone will make a copy and try to pass it off as antique. On the other hand, anything which is made as a copy or a fake will, technically, become "antique" after a century of life.

This is one of the problems with the term "antique". Back in 1800, if you look in a dictionary from that period, "antique" refers to an object of great antiquity. In other words, Greek and Roman objects were considered "antique" to the leaders of the French and American revolutions. During the Victorian period, which lasted over 60 years, the revivalism of earlier styles and fashion changed the concept of antique to include objects made during the previous century.

This idea that something over 100 years old was antique was common, and allowed rich men like Frick, Hearst, Mellon, and their Robber Baron buddies to import tons of stuff from Europe tax free, claiming it was antique. I still think of my son, at the age of 8, standing at the front of the tour at Hearst castle, raising his hand to ask the guide a simple question: "My dad says there are no antiques here." Actually not a question, and certainly not the question I would have proposed. I spent the rest of the tour avoiding eye contact with him.

By 1930 the government stepped in and the Hawley-Smoot tariff act included a definition of antique as "made before 1830". This was intended to reflect the fact that pre-Victorian objects were generally made by hand, and had a higher value than those made later, during the Industrial Revolution. This definition is the one I grew up with.

In November, 1966, President Johnson signed a law which included a change in this definition, designed to reflect the antique dealer's lobbying efforts, and reinstated the 100 year old description. Overnight all the stuff made between 1830 and 1866 became valuable. Tiffany and Belter pieces which had been donated to thrift stores now commanded incredible prices.

More importantly, collectors could anticipate that investing in objects which will "mature" into antiques soon is possible, so people began looking at Stickley and Craftsman furniture as a good purchase.

At the same time, a fake made over 100 years ago is technically "antique" and that creates the problem. Unlike fake money, fake antiques are rarely if ever destroyed. They continue to live in the market place and confuse the consumer. So, "When is an Antique Fake?" has become the title of one of my most popular talks.

I post a picture of two candlestands. One is a fake, made in Italy, designed to look old. The second is a copy of that fake, made last week by a carver in my shop. I added the "patina" and color to match the first. So, we have two objects, a fake which is "antique" by age alone, and a copy which will be "antique" in 2111. Guaranteed.

I note in the New York Times today that Albert Sack has passed away at the age of 96. He was the last member of a family business that opened in 1905 and dominated the top level of the antique business for a century. His passing marks the end of an era.

I first met Albert in his store in the early 1970's. I was dressed in typical West Coast winter mountain gear: Swiss leather mountain boots, Levis, Pendleton and down jacket. Not exactly your upscale client. However, Albert invited me into his store, took several hours to walk around with me discussing the merits of each piece, and then showed me dozens of photographs of items he had sold in the past which were very helpful to my research. He knew I would never be able to purchase anything, but he recognized a fellow enthusiast of the field.

When you live with Antiques you live with history. American culture is fairly young. The value of understanding different periods of antiques is that it tells the personal story of how this country has evolved from one coast to the other. The transition from a farming based culture to a merchant and consumer based economy can be documented by the objects left behind.

During those early years of my travels around the country, searching for antiques in odd places, I called my research "cultural anthropology." That was before that term actually became a real class in some colleges. My idea was to visit some obscure antique store and ask the owner which pieces he had that he knew were made in that region, and why. I learned about regional characteristics, secondary woods, unique forms not made in other areas, and how each area reflected its particular ethnic origins, whether it was French, German, British, Canadian, or some other source of design.

At that time it was normal for the antique dealer to have a good understanding of his stock. Most dealers were connoisseurs of their speciality, and visiting a shop was always a learning experience. Just ask a question and you would usually get a lecture on the merits and qualities of any object. They had a passion for collecting and wanted to share their enthusiasm.

I remember a distinguished dealer, well into his 80's, shaking with Parkinsons desease, who insisted on showing me the mark under a huge Chinese porcelain bowl. He lifted it off the table and turned it over, while I tried to get into a position where I could grab it if he dropped it. I had only remarked in passing that it was a spectacular bowl, and, in truth, I didn't know anything about Chinese porcelain. However, I now think of that bowl and that mark.

Antique shops today are filled with junk. The business has transformed into swap meets, garage sales, flea markets, storage unit auctions, and pawn shops. Even the roadshow focuses more on the money and less on the history and culture. Albert Sack was the last of his breed.

Like any business, the antique business is transforming and evolving. My generation is older and has collected for years, and now looks at downsizing but our children do not appreciate the stuff we want to give them. They want their post-modern environment and their electronic toys, but not something which was made centuries ago. They do not care about history or culture in the same way that Mr. Sack did.

That may change, and the change could come in a surprising form. People who care about the environment, climate change, carbon footprints, recycling, and all the other progressive ideas which are topical these days, will learn to appreciate antiques for another reason. Antiques are carbon neutral and "green". Antique furniture was harvested by human and animal power, shaped into their final form with sweat and skill, and represent the survival of historic old growth forests. Modern furniture is made with toxic glues and finishes, often transported around the world with petroleum based ships and fabricated and assembled with industrial machinery, consuming precious resources. Modern furniture is also designed to be disposable, since it does not survive many years and is usually not repairable.

Support your local antique dealer, if you have one. Support your local furniture repairman, if he is using hand tools and organic materials. Save the antiques your parents are trying to pass on. Cherish the history and culture of the past. It is your heritage. The real value is knowing how we got here and understanding the meaning of living with antiques.