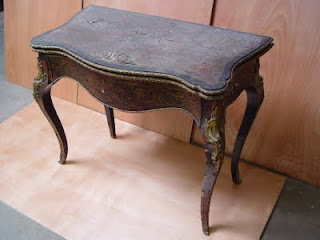 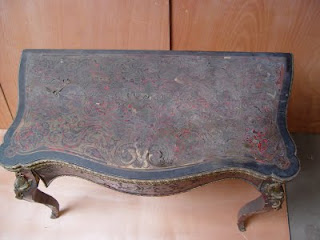 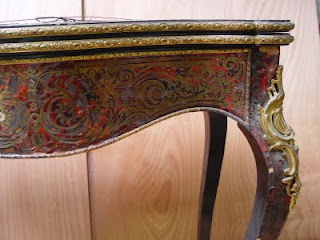 One of the most rewarding and frustrating projects I have done over the years is restoring Boulle furniture. By common usage, the term "Boulle" refers to the furniture which is made with brass and tortoise shell marquetry, generally from the last quarter of the 19th century, in Paris.

This period, referred to as Napoleon III, represented a revival of the technique of marquetry popular during the period of Louis XIV, when Andre-Charles Boulle was the most important ebeniste in France. Of course, the early work by Boulle and his contemporaries was made with a much higher degree of quality and workmanship. In fact, the type of tortoise shell used during that time was from a different sea turtle, which was a meat eater, and produced a much thicker shell. The thicker shell was perfect to match with the thicker sawn veneers available at that time.

The shell used during the Napoleon III period was from a sea turtle which was a vegetarian, and the shell was much thinner, also a good match for veneers used later in the 19th century, produced by slicing machines.

The term "tortoise" shell is confusing, since a tortoise lives on land and a turtle lives in the ocean, but that is the term which has always been used for this method. C'est la vie.

After determining which species of shell is used, it is necessary to select the appropriate shell for restoration from a turtle of the same age. Turtles live a long life, and the young turtles have very dark pigment in the shell which forms large areas of color, contrasting with the naturally clear background. As the turtle ages, these blobs of color spread out and become rays of dark, turning into spots of color in very old turtles.

Of course, sea turtles have been on the endangered species list since 1986 and are a controlled substance, so only the restorers who have old stock (and can prove it) have access to this material. I personally have about a kilo of shell, of both species, which I purchased legally prior to the ban, and I use it for appropriate restoration projects.

Another source of shell is damaged furniture, but in that case only very small pieces can be salvaged. There is a plastic shell substitute, used in the guitar industry that works, and there is a substitute shell made using protein glues and coloring, a recipe that first appeared in the 18th century and, more recently, was perfected by Don Williams, working at the Smithsonian.

The other material, brass, is common, but must be annealed so that it is soft. It is hard to do that in a small shop, since it is best done in a large oven, where the sheet is evenly heated and allowed to cool naturally.

Almost all Boulle furniture is damaged by workers who do not understand what to do, and usually resort to nails or epoxy or plastic filler to repair the surface. These efforts make the proper restoration difficult. It is essential to understand that the traditional adhesive, fish glue, is the only adhesive that should be used to restore Boulle. Attaching brass to wood is difficult, since under environmental changes, the wood and brass move in opposite directions. This constant tension between the marquetry and the substrate is controlled by the properties of fish glue, which allows a small amount of sheer movement during these fluctuations, while keeping the surface stuck in place. Fish glue is used for tortoise shell, brass, pewter, mother-of-pearl, ivory, bone, horn and other exotic materials which do not move in the same manner as wood veneer.

The other problem with brass is corrosion, which attacks the brass when the finish fails. I have restored Boulle furniture which lived in Hawaii, and I can attest to the problems of salt air on brass. Not a pretty sight.

The third part of the surface is the mastic, which is composed of protein glue and wood dust. This mastic is around all the elements, filling the gap where the saw blade cut away the materials. This mastic is easily softened in cold water, and can be carefully removed using dental tools. It is often necessary to remove the mastic to repair the surface, and replace the mastic after the repair is completed. Unlike wood surfaces, it is fine to apply the mastic from the front surface, since neither brass or shell is porous.

The shell is prepared by boiling in hot sea water for some time to soften it. Then it can be scraped flat on both sides and shaped to the contour of the surface. It is glued with fish glue, colored with red or brown pigment, as necessary, and placed over red or brown Japanese paper to produce the proper color. In some cases, gold leaf is placed under the shell to produce a very exotic look.

To repair and remove the surface requires care and attention. Paper towels are placed on the surface and covered with cold, distilled water. On top of this a plastic film is placed and the worker waits patiently. After a short time the mastic will begin to soften and the water and towels are removed. Now the repair can begin. More detail on this process is found in my 1997 AIC paper, "Current Trends in Conservation of Marquetry Surfaces", which can be found on my Consulting page of my website.

In most cases, the cost of restoration of Boulle furniture which has been badly treated greatly exceeds the value of the piece. It is only for sentimental reasons or pride of accomplishment that these projects are usually attempted. It is a challenge, to be sure, and one of the guaranteed parts of the project is that, once the initial repair is completed, new areas of lifting will appear somewhere else.

Only after all the elements are properly glued in place can the polishing begin.
Posted by W. Patrick Edwards at 10:19 AM 11 comments: 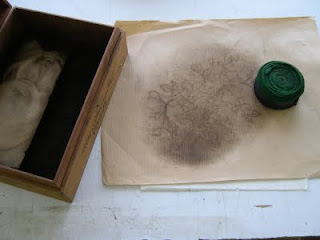 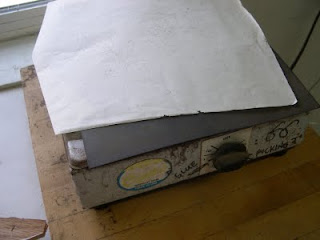 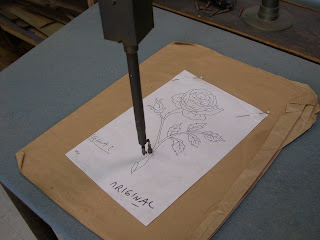 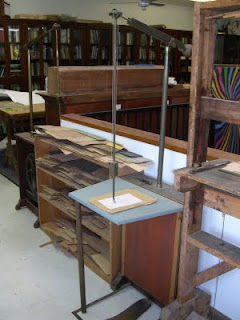 Using a picking machine allows the worker to make dozens of copies of the original drawing, each design exactly like the other. The use of a picking machine along with the creation of the chevalet allowed the French to perfect the "piece by piece" method of marquetry, which has many advantages over all the other methods. This method they kept to themselves for almost two centuries.
Posted by W. Patrick Edwards at 2:47 PM 5 comments: