Not A Leg To Stand On! 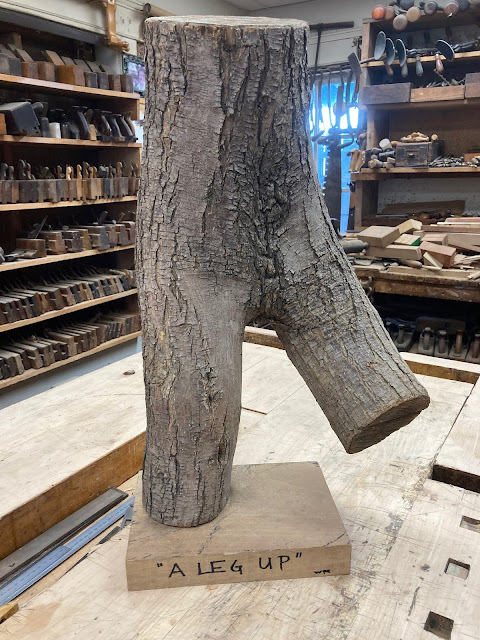 I am not even mentioning the shrinkage of the drawer bottom which pulls out of the dado in the front, which then allows the bottom to fall out when the drawer is over loaded with junk.

Just a note: Traditional drawers were intended to hold clothing...not books, or dishes, or a large coin collection or fishing weights.  Just clothing.  I have seen it all.  Nothing would surprise me.

However, there is another part of furniture which is often more damaged than the drawers and that is the feet.  People push furniture around without lifting it, they bang the feet with vacuum cleaners, they put things in storage for years and let the feet sit in standing water, they tilt heavy cabinets up on their side putting pressure on the legs, they sit in chairs and lean back or twist the chair around without getting up...

Again, I thought I had seen it all, until this latest project appeared.

A collector in Colorado saw a good French Regence Commode in an auction in San Francisco and placed the winning bid.  He then hired a mover to deliver the commode to his residence on the top of a mountain. This mover put the commode in his truck and placed the heavy marble on top, wrapped it in blankets and drove to the client's house.  I doubt that the mover even checked the feet to see if there was any previous damage or bug infestation.  He also did not consider putting the valuable marble in a wood crate and packing it separately.  It is fortunate that the marble did not break as well.

When he arrived and opened the door there was a surprise.  All the feet had broken off and the commode was sitting on its bottom.  This was no real surprise.  The surprise (and mystery) was that 3 of the 4 feet had somehow completely disappeared!  Since the two front feet had original mercury gilt bronze mounts, of course they had also somehow fallen out of the truck and probably are laying on the road between San Francisco and Denver.  The only surviving foot was a single back leg, which we used as a pattern.

The client delivered the commode to us for restoration at the end of 2019.  But before we began the process of making new feet we thought it was appropriate to photograph it while it rested in a handicap zone... 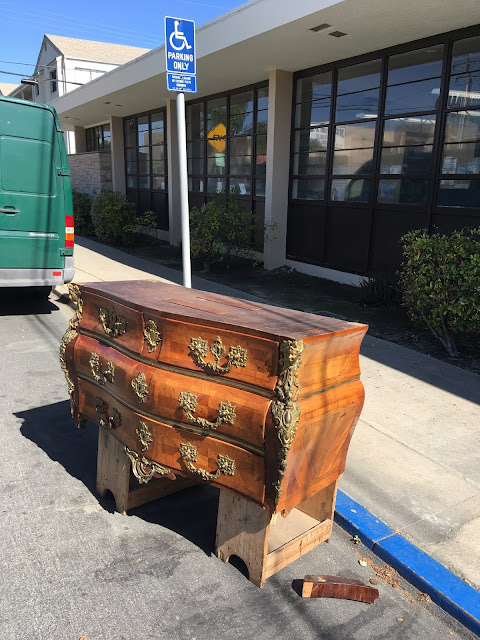 When we returned to work Patrice indicated he wanted this job, and I went to work on the legs of a wonderful French Louis XVI commode.  So Patrice put the commode upside down and took much of it apart.  Since the legs were badly damaged by years of bugs, we immediately had it fumigated with methyl bromide.  Patrice also had to lift up much of the veneer to get to good solid wood and attach the new leg elements. 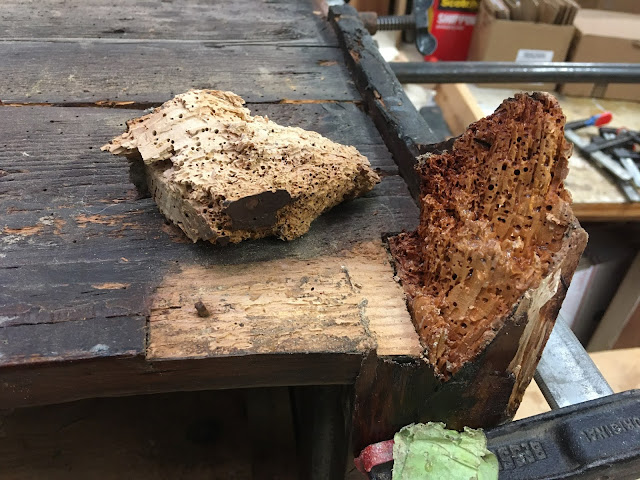 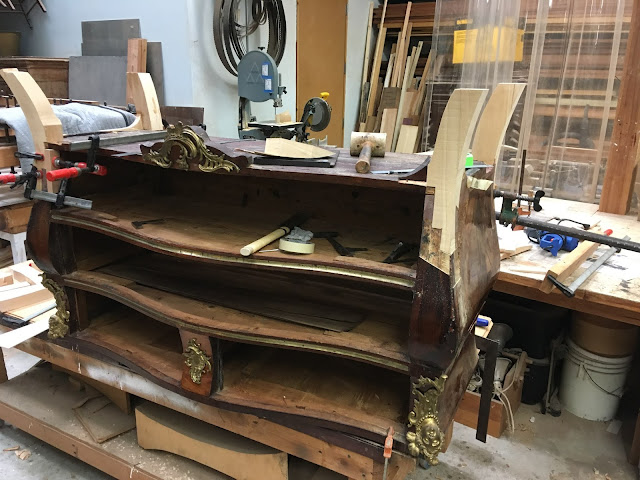 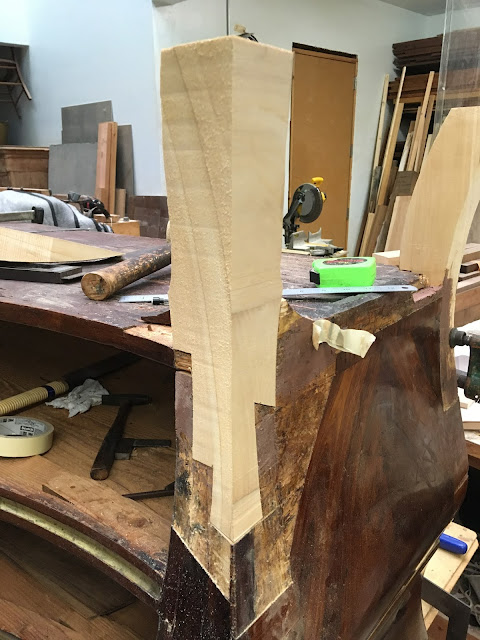 At this point it was necessary for Patrice to make a duplicate leg blank, which was sent to Paris for the new replacement mounts to be properly fitted and shaped.  It was about that time that everything shut
down due to the global pandemic.  All we could do was wait and see what would happen.
The surface veneer was sawn period kingwood, which is a controlled species due to C.I.T.I.E.S.  However, I have a good supply of this and other similar exotic species in stock which I purchased in Europe years before they were listed as endangered, and legally imported them to my workshop.  The original veneers which were carefully lifted were put aside, and when the replacement leg blank was ready they were glued back in their proper position.  It was necessary to "age" the new kingwood with acid to match the color and patina of the rest of the surface. 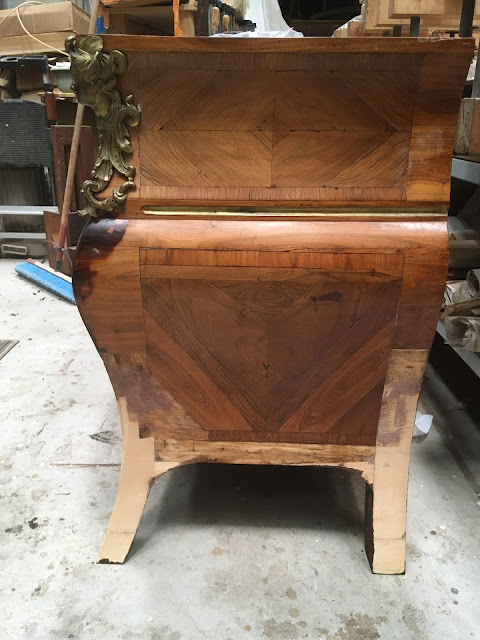 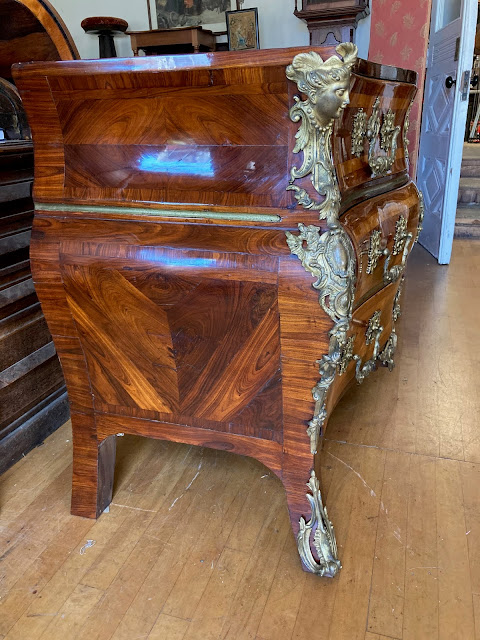 Finally we were able to receive the replacement bronzes from Paris and spent some time to "age" them to match the original surfaces of the rest of the piece.  All the bronzes (except our two feet of course) were completely authentic and original to this commode, so it was important to complete the set.
This photo shows the new bronze during the process, but before it was a complete match. 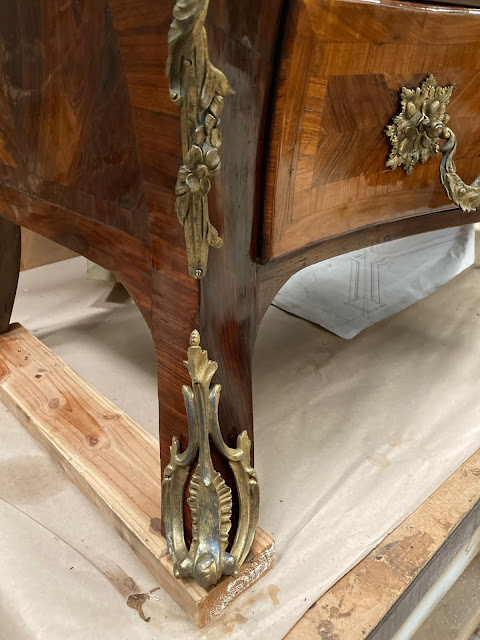 Here is the end result.  Now the piece can stand proudly on its own feet. 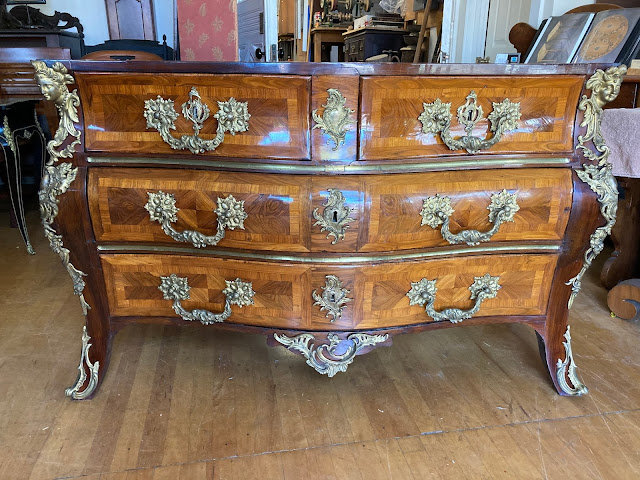 Meanwhile, I was occupied with the legs of my Louis XVI marquetry commode.  They were originally veneered in purple heart, but the veneer was so badly damaged it was necessary to replace it.  I have posted videos on my YouTube channel (3815Utah) about my method for veneering columns using Old Brown Glue.  In this case, the legs were solid oak and tapered.  The same process worked perfectly. 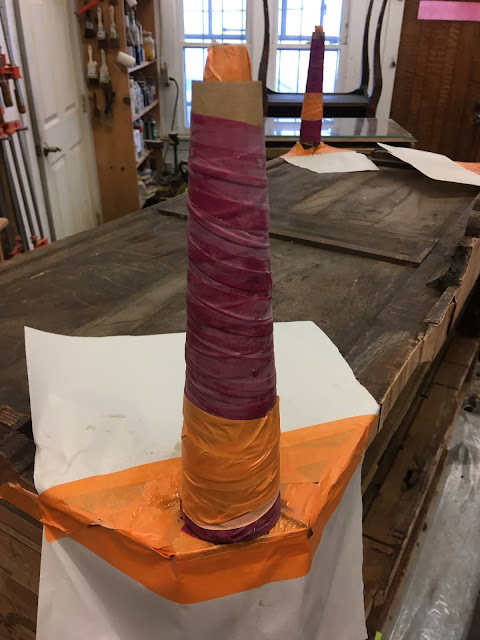 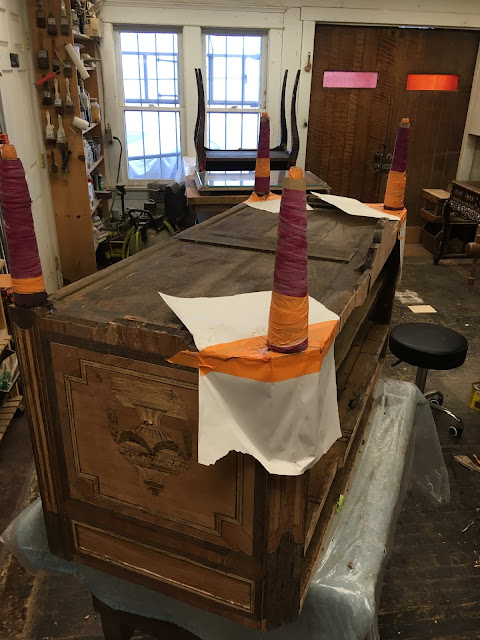 I also had to match the faded color of the old surface, so I used a two part bleach to get much of the color out of the new purple heart veneer.  Then I added finish and color to get a good match.  This is what it looks like now.  My job was much easier than that of Patrice... 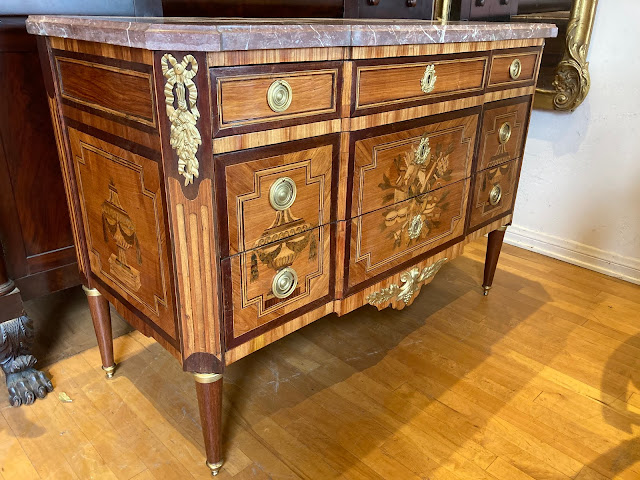 It was fun work and Patrice and I ended up completing our respective projects at about the same time.
PS:  The photo at the top of this post is one of my original art sculptures.  It is a piece of a tree that I cut down for firewood many decades ago.  I just didn't have the heart to throw that particular piece in the fire...

Posted by W. Patrick Edwards at 3:37 PM No comments: