When Pierre Ramond published his three volume set, "Masterpieces of Marquetry," in February 1996 I was in Paris.  I did not know that his new work was out, and I stopped by the workshop at the Musee des Arts Decoratif to see what my friends were working on.  As I walked in the staff gave me a round of applause.  This was not the welcome I usually get, so I asked them what was the occasion.

They said that I was included in Volume II of his new publication, on a full page!  I had no idea.  It was amazing to consider that Pierre had included me, and I could not imagine the reason.  They handed me their copy and I read (in French):

'The perpetual transfer of techniques between continents can be illustrated by Patrick Edwards's (sic) equipment...After a training period of several months at the Ecole Boulle, this American craftsman built his personal donkey as well as a model for his hometown museum, where he is in charge of furniture restoration."

Now, to be clear, this is not exactly correct.  My French is not that good, and Pierre might have not understood me perfectly.  In fact, I built my first "donkey" around 1976, about 15 years before I was invited to ecole Boulle by Pierre.  Also, the photo in the book shows me working at the Timken Museum, in San Diego, in a small didactic gallery workshop I built for public demonstrations.  I am a furniture conservator in private practice, and, although I have worked on several projects for a variety of museums, I have never been employed as a museum conservator.

The most important aspect of this inclusion in Pierre's book is his suggestion that I was in some way responsible for the "chevalet" itself being exported from France to North America.  That is a big compliment for me.

I have been fascinated with marquetry for a long time.  When I discovered the chevalet I realized that it was an unknown tool in this country.  The original tool I saw was in a private collection of a French ebeniste in Los Angeles, and after that I met another French ebeniste working in New York.  But those were the only two people I could find who owned a real chevalet and knew how to use it.

American woodworkers love their tools and most furniture makers I know try to buy as many tools as they can.  However, none of them had such a tool, and I realized that, if it were introduced and understood, it would be adopted as the best way to cut small pieces of marquetry.

That is why I set up a gallery in a public museum, and made a video, in an effort to promote the process of cutting marquetry using such a tool.  After my experience at school in Paris I was convinced more than ever that this tool needed to be made available in my country.

So when Pierre retired from teaching in 2000 I asked his permission to open my own school in San Diego using his methods and designs.  I understood that the only way to make the chevalet popular was to instruct students in its use.  I needed to make them understand how to build a chevalet that fit their body and how to fine tune it and what it can do for them in the field of marquetry.

Since there was no such thing as a chevalet available in this country, I searched around to find a machinist that would agree to make the specialized hardware.  Then I collected all the miscellaneous bolts, screws, chains, washers and nuts to fill out the kit.  I drew up some plans and offered the hardware kit with plans for my students to build their own.


The biggest problem was that most of the students were interested in cutting very small pieces of veneer, not focused on the timber framing work it required to put together such a large wood tool.

I kept selling the kits, but always hoping that I would find a person who wanted to build the tool as a business, thus making it available for the first time in this country.


A few years ago I was at a national woodworking conference in Kansas City and I met David Clark.  He was a retired woodworker and got excited about the prospects of selling American chevalets.  David and I worked together for some time to perfect the design, making it as close as possible to the best French chevalets that I knew were at ecole Boulle.

This year we achieved perfection.  I ordered 5 of the Clark & Company chevalets to install in the American School of French Marquetry.  Along side the original prototype he made, we now offer 6 different sizes of chevalets made by him in addition to the original tools which remain.

I no longer offer the hardware kits and blueprints.  I never made any profit selling them and it was always a hassle to keep parts in stock.  I connected Dave with my machinist so he can continue the quality of the hardware along with his wood parts.


He has really spent time setting his shop up to make these tools.  They are finely fitted and sanded, ready to put together.  They all fit in a small box and, since he is located in Missouri, he is central to the country for shipping.  Each kit is custom fitted to the customer's body size and can be put together and ready to cut in a few hours, without any special tools required. 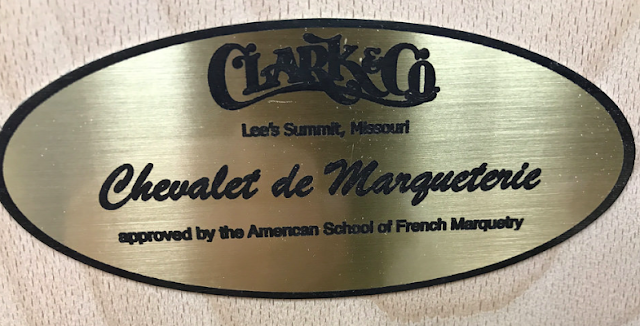 Email him at david.chevalet@gmail.com for information.