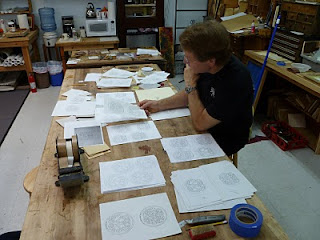 When I first entered ecole Boulle, my professor, Dr. Pierre Ramond, did not speak any English except for the phrase, "Is Good" and "Is Bad." It all depended on those two statements. In other words, my work was Pass/Fail. To make the situation worse, I did not speak any French.

We had quite an experience at first, with lots of hand gestures, and a lot of confusion. Fortunately, I was familiar with all the tools and materials that were being used in the workshop, so I was able to start learning the basic words for things. One of the methods I used to learn the language was to use a pocket cassette recorder and record the entire day. Each evening, as I sat in my hotel room, I would play back the recording and try to associate the phrases with what I remembered happening at that time.

As I was not able to ask detailed questions or even understand the answers, I did not understand fully the significance of the teacher's choice of design. The first thing Dr. Ramond did was show me three different marquetry designs. He indicated that I should choose the design that I wanted to do during my Stage. There was a very simple design, a second which was intermediate and the third would have taken me the full three months I was planning to stay at the school.

I had done complicated designs before, so I was not concerned with the degree of difficulty. I did not want to spend all my time working on only one project, so I picked the most simple design. Pierre was surprised and amused. He said something which I did not understand. One of the students told me he had asked why I would pick such a simple design.

I said, "If you want me to cut circles or squares, I will do that. I am not here to impress you with my talent. I am here to learn exactly how the French method works, and I want to do as many projects as I can. So I picked the easy design."

When the student translated that to Pierre, I saw his expression change. He smiled.

After spending 4 years at ecole Boulle, with Pierre, I learned that his most important goal was providing the best design for the student to grow and learn properly. The design needs to be slightly more advanced than the level the student is comfortable with, to encourage him to get to the next level. By selecting the basic design, Pierre understood that I wanted to start at the beginning, even after 20 years of working in the business of marquetry production.

During the third year, soon after I arrived, Pierre walked up to me and handed me a design with the title "C.A.P." I had no idea what that meant, but, one by one, each of the other students in the class came over to me and shook my hand. By then my French was much better, and as they congratulated me they explained that I was given a design which was a test. The "Certificate of Aptitude Professional" or C.A.P. indicated that the worker was competent in the professional skills of the trade.

I need to explain that I was not a full time student. I was taking a 3 month "Stage" each year. To be a full time student and pass the C.A.P. is very difficult. I was only given a design, which is just a small part of the C.A.P. test. Still, it was an indication of the confidence that Pierre had in my work that he decided I should execute that particular design. I was very proud.

When I opened the American School of French Marquetry, I asked Pierre if I could use his designs for my students. He supported me in every way, and encouraged me to follow in his footsteps. I also decided that it would be best for the Stage I students to do three exercises in the first week. Three simple exercises, which would reinforce the process by repetition.

The third exercise has several degrees of complexity. I look at each student during the week and decide how well he or she is cutting and at what speed. Then I select the proper variation of the third exercise that will allow the student to complete on time and still challenge their abilities. So far, it has been very successful.

By the way, I eventually learned French from the students, who discovered that I knew all the lyrics to all the Pink Floyd songs, as well as what Roger Waters was thinking when he wrote them. We made an agreement: if they could teach me French, I would be able to explain what the songs meant. Just try to explain the lyrics to "Comfortably Numb" in French.