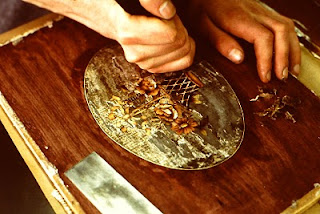 Before I went to Paris to study with Pierre I had been working over 20 years restoring antiques and making marquetry. I had read all the books that existed in English and that was the source of much of my knowledge as well as my problems.

I have mentioned before in this post that the first time I saw a copy of Pierre's book, "Marquetry," which was published by Taunton Press in 1989, I was introduced to methods which resolved many of the difficulties I had encountered. I was already using a chevalet to cut designs, since I built my first tool 15 years earlier. However, it did not come with any instructions! I had to teach myself by trial and error as well as deduction.

My first mistake in building the chevalet was that I placed the blade in the saw in the wrong position. I knew that it cut on the push stroke and was held horizontal in the jaws. However, I positioned the blade with the teeth cutting on the left side, not on the bottom. That meant I had been cutting for 15 years by feeding the material into the blade from the left, cutting sideways.

When I arrived at ecole Boulle, I knew that I would be able to use the chevalets with confidence, since I had been sitting on one for a long time and had lots of experience. After all, my first project was cutting a table top which was 4' x 15' (which took 300 hours). Imagine my surprise when I sat down and realized the blade cut down and not sideways!

There was another aspect of the French method which had eluded me as well. I had used lots of gummed veneer tape to hold my work together, as most workers do in countries outside France. I would start to salivate as soon as I saw a roll of tape, and had licked miles of tape in my career. I wonder what the protein content of veneer tape is?

The biggest problem with taping projects together is that the layers of tape are not even all over the surface. In some places there were many layers of tape and in other places there were only a few layers, or none. That created problems when the marquetry was put into the press, as the pressure did not evenly reach all the surface of the veneer at the same time. Other problems were caused by tape not properly adhering or not pulling the pieces together properly.

In reading Pierre's book, I noticed a short mention of the kraft paper, which he uses. On page 73 is a paragraph which describes the 4 types of paper used in marquetry. "Grey kraft paper for gluing and inlaying," is the only mention of this material, and no where does he discuss making an assembly board with this paper. Clearly, it is such an obvious trick that he does not feel it necessary to explain further.

I have posted previously the proper method for making an assembly board using kraft paper. (Post dated 10/10/10).

When I saw the students building such amazing projects with this method I realized what an important part of the process this was. It allowed the pictures to be built face down, which created a clean front with all the elements pressed forward properly. It allowed the work to be done from the back, where tool marks and mastic were not seen in the final result. The paper was easily removed after the picture was glued to the project by using cold water and gentle scraping. Most importantly, it allowed even pressure to reach the entire surface, since there was only one layer of paper holding everything together.

Unfortunately, kraft paper is not available in America. I have to import it at some expense from France, and I sell it for my students to use at a reasonable price. I wish it were more generally available. It seems that in our modern world we are so anxious to have the newest electronics, but who cares about such a simple material as traditional paper?
Posted by W. Patrick Edwards at 8:23 AM

I went back and read your explanation of the assembly board. I am rather slow and don't fully understand what you explained. Is the kraft paper that is sold by companies like "PaperMart" incorrect? Thanks for your very interesting site.

European Kraft paper is made by layering the paper fibers, in a traditional method. One side is shiny and resists water, while the other side is dull and absorbs water. When the shiny side is wet it expands. This allows the paper to be glued to the edges of a board and, when it dries, it shrinks tight. This paper is attached to the board with the shiny side up. The marquetry is assembled on this surface using hot protein glue. When complete, the picture is removed by cutting the paper around the outside of the picture. This panel of marquetry can then be glued to the furniture with protein glue, and with the paper surface (now the dull side) on top. After the glue is set, cold water is applied to the paper (dull surface) and it is easily removed after a few minutes with a razor blade or chisel or scraper.

As far as I know, there is no American supplier of this type of paper, but if you find a sample you think would work send me a piece and I will confirm. I can also send you a small sample if you wish. I would like very much to find a domestic source.

Can you let me know where you get it in Europe. I will be in Paris in fall 2011 and would like to pick some up if possible.

I have bought rolls of Kraft paper from various industrial companies, most of which are outside Paris. However, the use of Kraft paper is ubiquitous. Practically every store, from fish sellers to flowers will have Kraft paper ready to wrap your purchase. You can also purchase small rolls at any large department store, like B.H.V., Monoprix, Casterama, or my favorite art store, Graphicgro. If you have a choice, get 90gm/square meter weight. Just a note: it is no longer good for marquetry after you remove the fish.

Interesting, we have kraft paper in Indonesia, also called "kertas kraft" (literally means kraft paper). It must be the cultural remnants of Dutch colonialism. We never used it for food though, only for covering small school exercise book for children, and sometimes for packing non-food stuff.
-S