Pierre Makes Glue For All To Use 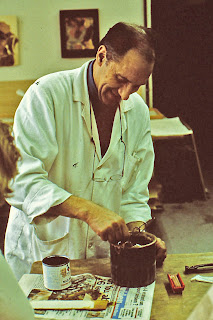 I cannot say enough to explain how much Dr. Pierre Ramond, professeur d'marqueterie a l'ecole Boulle, changed my life.

On a human level, he demonstrated to me that passion and enthusiasm are just as important as solid research and knowledge in your work. We live our lives surrounded by thousands of acts of human genius, and it is normal that, since we are involved in our own egocentric world view, we often fail to open our eyes to the miracles that surround us. The difficulty is understanding the balancing act which is necessary between passion and objectively.

On a professional level, he demonstrated how much there is to appreciate about the range of methods, materials and historic processes used over the centuries in our trade. He would look at a marquetry surface and explain at great depth how the woods were selected, how the colors were achieved, how the pieces were cut and glued together, how the style and complexity could be used to indicate the age or origin, what was good and what was bad.

In fact, when I first met him, he did not speak much English, and I spoke no French. The first three months I existed on two phrases, which he used often: "Is Good" and "Is Bad." In the beginning I thought all he could say was "Is Bad." It was several weeks before I knew he could say "Is Good." Understand that he did not say these phrases with any particular emotion. It was not punishment to hear my efforts were "bad." It was just a fact. There was no way to explain to me how bad or what I could do to make it better. Just the fact that I could make it better was the only conclusion I could make.

When he finally said it was good, I was elated. At the same time, since it was just a simple fact, I had no idea how good it was or if I could even make it better. As I worked in the school, the other students began to help me understand what he meant and how I could better communicate my questions.

Pierre had a small class, compared to the other teachers. He normally had about 15 students, which included in the same class first, second, third and fourth year students. Each student helped the other. Pierre watched over them like a proud parent. Most of the time he listened to the sound of the saws as they worked. It was amazing how sensitive he was to the sound of the workshop. Anytime there was an unusual sound, he immediately was at the student's side to assist in the problem.

He always encouraged. He was always positive. He always was ready to discuss new ideas or elaborate on old techniques. He was also involved at the same level as the students. By that I mean that he had the ability to relate to students, visitors and staff on an equal basis at their level of understanding. As a direct result of this ability he was able to elevate their insight to his level, which was at the highest professional level possible.

I first noticed this during class, each day at 10am and 3pm. That was coffee time. Class would start as usual in the morning with all students greeting each other and starting work independently. Pierre would stop class at times for all to meet together to get a short lesson in some technique, then back to work. Promptly at 10 coffee would appear in the center of the room, and all would stop to drink and tell stories, like a big family. The coffee was prepared and cleaned up by different students each day, and this task was organized among the students for the benefit of all. It was strong coffee and, after 15 minutes the group returned to their tasks.

Pierre was just one of the gang, during coffee time, and he even had an open door for the school staff and workers to show up and take a break. After coffee, he transformed into the professor who was always assisting the student as needed. His quick smile and honest sense of humor was always ready to warm the room.

Pierre provided the glue which held us together. I will be forever grateful for having met him. "Is good!"
Posted by W. Patrick Edwards at 8:23 AM