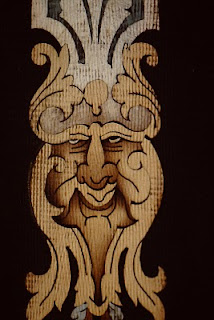 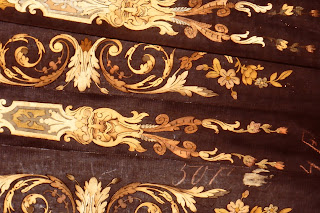 One can only imagine what it must have been like standing in the center of Andre-Charles Boulle's workshop during the peak of his career. The piles of exotic materials, like imported hardwoods from all corners of the world's forests, the tortoise shell, ivory, brass and copper sheets, gilt mounts, complex hardware, all formed a backdrop for the magnificent projects which were being constructed with great precision by dozens of talented workmen. From time to time the king or his representative would visit and verify that all the work was done to the highest level possible anywhere in the known world
.

All that was destroyed by a fire in the workshop around 1720, and the loss was beyond measure, both to the King and France, and to the history of furniture making. Boulle never recovered and died a decade later in debt. The fashion for "Boulle" decoration declined and was replaced by the more colorful marquetry decoration of the mid 18th century made possible by the French invention of the picking machine and the development of the chevalet.

By the way, I must admit that I like the work of Pierre Gole better than that of Andre-Charles Boulle, but that is another post.

The reason I mention this brief history of the trade is to discuss how tradition is kept alive through the centuries. During the 19th century the use of marquetry surface decoration almost disappeared. Many of the shops closed or changed their work to adapt to the clean, "modern" lines of the newest fashion. What tradition persisted in the old ways was transmitted by individual workers to their assistants. Even the traditional Guilds were abolished by the Revolution, and the Industrial Revolution threatened to eliminate much of the historic knowledge of the past masters.

Around the time of Napoleon III it was obvious that a school needed to be created to reestablish the methods of furniture making which were made famous in the 18th century. It took about 20 years, but at the end of the 1880's a new school was built and opened its doors to the first class of 60 students. That was ecole Boulle, and it stands today as one of the most important trade schools in Europe. Its mission is to preserve the historic trades of the past.

During the 20 years that this foundation of learning was being established there was a renaissance in the Faubourg St. Antoine, in Paris, where workshops again returned to making highly decorative marquetry. Much of this marquetry was applied to local creations, but some of it was made for export, and one of the more well known New York shops, Herter Brothers, purchased their marquetry at this time for their own use. I was restoring a famous Herter Brothers table before I attended ecole Boulle, and took pictures of this table with me when I entered Pierre's class for the first time. He pointed to page 60 of his book and stated that the marquetry on this New York table was made in the Guilmet workshop of Paris around 1880. More research needs to be done on this particular transmission of material from Europe to America during the late 19th century.

I have direct evidence of this trade. Years ago, at the end of a lecture I had presented on Decorative Arts, I was approached by an elderly woman, Jonna Aase. She asked me if I would be interested in some marquetry she had inherited. I asked "What kind of furniture is it?" She replied, "It's not on a piece of furniture. It is just marquetry."

When I visited her home, she produced several pieces of marquetry which had never been used. After I purchased them, she provided me with a note: "These are imported inlay woodwork brought to Odense Denmark by a Danish importer of veneer woods. Made in Paris about 1874. This date established by a newspaper backing on the reverse of the inlays dated in March of 1874 in the French language. Purchased in Odense by Chris Anderson and brought to America in October 1914." These panels were made with sawn veneers, highly tinted and faced with paper, as is the normal method. They even have prices!

I used these examples in my lectures and classes for years. Since I had several examples, I took many of them back to Paris and presented them to Pierre Ramond and Michel Jamet and Patrick George and other mentors who had helped me in my studies. I felt that returning these small samples of French work from a century ago would somehow contribute to the continuation of the grand tradition of design and culture.
Posted by W. Patrick Edwards at 8:13 AM

Being a Herter collector I would love to see photos of the French Marquetry to compare. There has always been a question of how much they bought or made in house. The Cremer blanks that they used are exquisite. We own 1st artcase Steinway which I believe has Cremer blanks.
Max Foote

Good to hear from you. Perhaps if you can send some photos of the marquetry which you have, I can do some research.