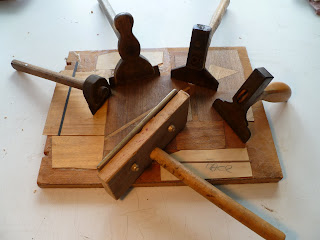 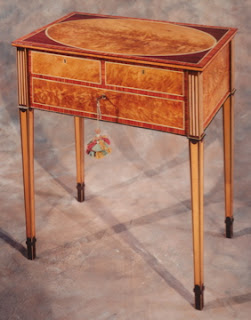 When I started in business the veneer market was dominated by Albert Constantine and Sons in New York City, a firm which has long ago disappeared from the field, for many reasons. At that time they supplied every tool and all the veneers in the world. I still have early price lists, and my mind reflects on the time I could purchase sawn Brazilian rosewood veneer for 28cents a foot.

Whenever I had extra cash, like $50 or so, I would order the "marquetry special" which consisted of a large box of "scraps" which was like Christmas. Each time I would anticipate opening the box, where I would find satinwood, boxwood, ebony, teak, mahogany, and woods I never identified, but were amazing colors and character. I think the cost was about 50cents a pound for the mix.

Since they were the experts, when they published a book on "Veneering Simplified" by Harry Jason Hobbs, I eagerly ordered it and followed the advice religiously. On page 53 was the illustration of a veneer hammer, which I immediately built, exactly as illustrated. Their hammer was made from a "discarded floor buffer" and it was horrible! Combined with the glues Mr. Hobbs recommended using (Elmer's Glue-All, Constantine's Contact Cement, and Titebond) I managed to destroy much of the veneer I had purchased.

As a direct result of reading what Mr. Hobbs wrote, I started to research protein glues and seek out other types of veneer hammers to solve the problems I had experienced. Finding antique veneer hammers is a rare treat, and I have discovered only two in my search. Adding to that collection is a typical German made veneer hammer, and a variation of that form which was made for me as a gift from Yannick Chastang, after his second "stage" in my workshop.

The Hobbs hammer is in the foreground of the photo. It is huge, clumsy and the blade is way too thick. Think of the pressure difference between sneakers and high heels. You need pressure, and a wide piece of metal does not work. The small hammer on the left is my favorite, since most of the hammer veneering I do is related to antique restoration, and that hammer reaches into the smallest corners. Next to it (going left to right) is another antique hammer with a more traditional shape. Next to that is the modern German version, which has a large iron head, and then the Chastang version.

Both the hammers with the iron head have the advantage that the iron can be placed in the hot water of the glue pot double boiler and quickly warmed up so that they can be used to reheat and reposition any piece of veneer, without having to use an iron. Both the antique hammers have wood heads, with a rather thin piece of iron for pressing the veneer. The iron is smooth and slightly rounded on the edges so as to not damage the veneer.

I suspect the veneer hammer is called a "hammer" only since it looks like one. There is never any hammering involved. Rather it should be called a veneer "squeegee" or veneer "sliding thing for pressing out the glue." In fact, it is not held like a hammer but the handle is used for driving the tool across the veneer, while the head is pressed down with the other hand.

Hammer veneering is a simple task, and should be practiced by any person who wants to work with veneer. You need a hot glue pot, toothing plane, scrap of wood and some veneer, along with a veneer hammer. You put the hot glue on the prepared wood, place the veneer face down on the hot glue, apply glue to the veneer (glue side up) and quickly flip it over. The face is now up and has some hot, slippery glue on it, ready for the hammer. You press down with the hammer in the center of the veneer, holding the handle in your left hand and pressing down on the head of the hammer with your right. (I am right handed; switch these instructions if you insist on working left handed.) By driving the hammer from side to side at a slight angle to the grain direction, you work to push the glue out to the edge. Work quickly, and, if the glue sets too fast, have an iron ready to reheat the glue. You need to continue until glue emerges from all sides of the veneer and gels. At that point you are done.

The clamping is provided by atmospheric pressure, which is tremendous. You create a vacuum under the veneer by pushing out all the air, and the glue prevents air from entering, so the atmosphere holds it in place while the glue continues to loose moisture and set. Think of how the shower curtain sticks to the tile wall when you press out the air. Same effect.

Hammer veneering has been used for centuries by artisans with very simple workshops. No need for a press, or large collection of clamps. You build up the pattern in place, cutting through the freshly laid veneers and removing the waste strips, hammering the joints tightly together. Absolutely fantastic for adding string inlay; simple and quick.

I made the Hepplewhite work table shown here using only a veneer hammer, and you can see the extent of detail which is possible. It was fast and easy, and, since the protein glues set rather quickly, I was able to build this project on a series of steps, each taking about 3 hours. Three shifts a day for a week, and you have something to brag about.

What kind of wood is used for the non-iron head?

I have heard of some veneer hammers that use lignum vitae would that be a good choice for making my own?

All of the veneer hammers I have seen have either brass or iron blades, held by a wood head. The modern hammers have heads made entirely of iron. Iron will rust only if it is left wet on the veneer but is not a problem if used properly.

The smallest hammer shown has an iron blade which is 2mm thick, the next one has a 3mm blade. Both are handmade by workers, more than a century ago. The wood head is simply held onto the handle with a wedge.

Oak, maple and beech are my preferred woods for tools. I have an aversion to making practical tools using exotic species of woods. Tools are tools, not works of art. The finest tools made during the past included Cuban mahogany, boxwood, rosewood, lignum and, of course, ivory.

However, I have a feeling that these "fancy" tools were designed to be sold to the "gentlemen" woodworkers, not the general trade. Anyone who knows me knows I am not a "gentleman".

Thanks for the valuable info. I'm going to copy the little guy on the left. I'd planned on making it wider and had assumed I'd need to order some 1/4" thick brass but if 2mm works, I'm going to try using the brass door kick plate I have on hand. I'll see how it goes and upgrade to thicker brass on the next project if I need to.