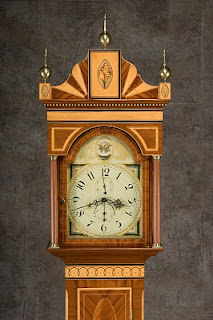 Last year I was honored with a museum showing of my work here in San Diego, along with 4 other local woodworkers. I had several pieces on display for 6 months and it was a very good experience as well as public exposure which attracted new clients. At the same time I was selected as one of the "stars" of San Diego in the magazine San Diego Home and Garden, for my woodworking business.

A very sophisticated couple from Houston were in town to visit relatives and saw my article in the magazine and took the time to visit the museum show as well. After all that, they called me to visit the workshop. I often have visitors to my shop, and most people are surprised to find a functioning and well established pre industrial woodworking shop in Southern California. 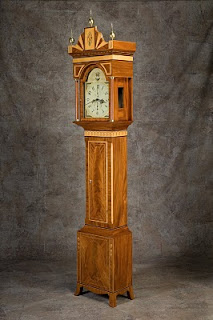 When they arrived, I showed them around and went through
my portfolio of work. They were impressed but said to me that they were American furniture collectors and not too e
xcited about the European taste I seemed to prefer. This comment made me think of a project I had set aside many years earlier.

I had
purchased at auction in New England a set of tall case clock works with wood gears. The face was signed by Silas Hoadley, and the hands were original lead hands. It was in reasonably good condition, but I replaced all the ivory bushings and some of the mechanism needed to be adjusted to make it work. I always wanted to make a case for it, and found a wonderful Federal clock by Daniel Rose which I thought was a perfect fit. It didn't matter much to me that Rose was working in Pennsylvania and Hoadley was working in New England. I just liked the design.

When I showed them the works and photos of the project they were interested, but left without any firm commitment. I got a call the next day from them in Disneyland and they said they had decided to purchase the clock.

I had all the surface veneer in stock, but I needed a quality substrate for this clock to survive in Houston. I called all my woodworking friends asking for some old growth New England white pine. I was honored when Frank Klauz said he would give me two boards he had been keeping for over 20 years. They were exactly what I needed, and I can never express my thanks enough to Frank; what a mentor and good friend.

I produced the clock exactly like the photo, and the works fit nicely. I used 2mm thick Cuban mahogany veneer for the surface, with boxwood inlay and marquetry. Antique blown glass gave it a nice original look, and Patrice created a wonderful faded mahogany patina.

Last October my wife, Kristen, and I delivered the clock in person. The couple were very kind and generous and we enjoyed their company as well as a visit to Bayou Bend, which I haven't visited in over 30 years. The clock looked perfect in their front room, and it instantly became a family heirloom.