A Lot of Boulle 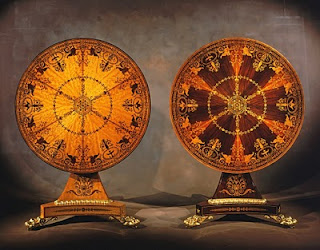 When I entered the fourth year of study under Dr. Ramond at ecole Boulle, I was given two assignments: Select a project and work with the administration to get my workshop accreditation.

The accreditation of my San Diego "atelier" by ecole Boulle was a major achievement. Not only did I have to learn enough legal French to negotiate the contract between the school and my business, but it meant that I would be able to receive the school's students for a "stage" and supervise their work. Between 1995 and 2000 I received 18 students and it was a wonderful learning experience for all of us.

The selection of a project was up to me. It had to be difficult and approved by Dr. Ramond. I found a wonderful table, which currently sits in the Royal Palace in Brussels. It is known as the "family table" and was probably made by Alexandre Bellange and exhibited at the Products of Industry Exhibition held in Paris in 1834. At the direction of King Louis-Philippe of France it was purchased and presented to his eldest daughter, Louise-Marie, the queen of Belgium.

The original table was over 2 meters in diameter, and I decided to execute the same design at half scale. Instead of a fixed top table, I adapted the base from a Thomas Hope drawing and made the top tilt, so you can enjoy the marquetry from across the room. I had the bronzes made in Paris, purchased the satinwood and rosewood from Patrick George, in Paris and started cutting. The rosewood (dalbergia nigra) is an endangered wood and listed on the CITIES list. However, the rosewood I purchased was legally harvested in 1952 and I was provided papers to allow importation. The satinwood is not yet endangered, but it comes from Ceylon, and I suspect it will soon be listed as protected.

The design of the top allowed it to be cut into six pie shaped sections. I built a pack of 6 layers of satinwood and 6 layers of rosewood and glued the design on the face. When all the pieces were cut out I proceeded to assemble the 12 identical pie shaped areas, 6 with rosewood background and 6 with satinwood background. The total count for all the pieces was 6,000.

I cut the Greek Key design for the border, and created the motif for the base. The pedestal was hand carved from a large block of tulip popular wood. The marquetry was glued to the pedestal using hot protein glue and heated sand bags, in the traditional manner. That was challenging.
It is surprising to most people that I spent much more time building the bases of these tables than the tops.

There is a trick to the tops which needs to be pointed out. Note the small ovals in the outside areas of the design contain swans, butterflies and lyres. These elements were added after the pie shape areas were assembled, since they do not repeat on all 6 sections. That was fun.

I can still recall as a student in stage II the day the package of Brazilian Rosewood arrived by mail. Your expression of joy was evident and I was much impressed by the veneer quality and watching you fetch the satinwood from the veneer cave! I had seen the drawing of the table top hanging on the wall and that even awed me but seeing the finished project was breathtaking. I was unaware that this was part of your qualification by Ecole Boulle

I also recall that you told me about the shrinkage of the original top causing it to be out of round somewhat. You had to correct the drawing to make it work out for a Boulle pattern. That seems like no small feat!

Since my studies at ecole Boulle were done in stages, which comprised 3 months each year for 4 years, I did not have a full year to complete my "diploma" project. I selected the marquetry design for the top and then discussed the project with Pierre Ramond during the time I was there. At the same time, I was working with the administration of the school to get accredited to receive their students going forward.

There was no reason to start cutting the design while I was in Paris, since I would not have the time to complete it. So I purchased the rosewood and had it shipped to my workshop. Then, when I returned to work in San Diego, business called and it was several years later that I was able to get back to the original project.

As you can see, it turned out well. And it sold for 6 figures. Sometimes I surprise myself.