I am often asked my opinion as to the age of furniture. Since I am considered an expert in early French furniture, and there is a considerable amount of examples extant, it is normal for me to address the issue of "period piece, reproduction piece or fake." When the piece is supposed to be from the 18th century or earlier, and has a veneer surface, my first question is "How was the veneer made?"

It is not obvious to most dealers, buyers or even experts in the field, but the simple difference between sawn or sliced veneer material provides absolute proof of the date of the furniture. There are few elements of furniture construction which are as conclusive as this difference in how the veneer was produced. 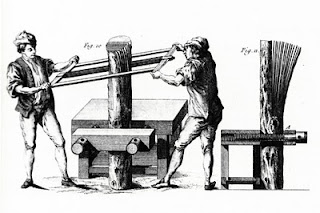 Prior to 1805 all veneer produced in Europe and America was sawn by hand. Expert sawyers who specialized in this trade were able to saw thin pieces of hardwood veneers using a hand saw designed for this purpose. The sawyers worked together, standing on opposite sides of the log, which was held securely in a vise. The veneer saw was held horizontal and the wide blade was positioned vertical and sharpened with a rip tooth. Each man followed his mark on his side of the log and worked the saw on the pull stroke. Sawn veneer using this method was often as thin as a few millimeters. After the veneer was sawn, the cabinetmaker used a toothing plane, with fine teeth, to scrape down the saw marks and level the glue surface. A similar toothing plane with larger teeth was used to surface the carcase, or ground work, and proved the "truth" of the work. The toothing plane left marks on both the ground under the veneer and on the back (glue side) of the veneer itself. These marks are usually visible upon close inspection. 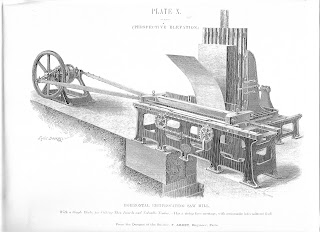 In 1805 the French invented a mechanical saw (scie a bois montant) which was able to saw the veneer much more evenly than the two men working by hand. Instead of the saw cutting down through the log, the wood was attached to a carriage and moved upward against the saw, rising as it was sawn, thus the name "saw
of wood rising". This saw made veneer much more available and regular in thickness, and the cabinetmaker no longer needed to use the toothing plane on the veneer. However, he continued to use the toothing plane on the ground work, as that wood was still surfaced by hand tools.
In the 18th century, hand sawn veneer was uneven in thickness, much thicker and irregular saw marks can often be visible. The machine sawn veneer was still thick (1.5-2mm) but regular in thickness and often shows the regular saw marks on the glue side. When the surface is refinished many times and the veneer gets quite thin, the refinisher can see the saw marks through the veneer, and knows to stop sanding before he pierces the surface. The saw marks look like very even and parallel marks about 1mm wide, and are always perpendicular to the grain direction.
As the sawing of hardwood veneers was difficult and time consuming, it was expensive. In addition, about 50% of the wood was lost in sawdust. The mechanical saw was also expensive and required a technician to properly sharpen and control the cutting. It took as much as one hour to saw a single piece of hardwood, so the process was quite slow.

In America and some other countries large circular saws were redesigned to saw veneers. This produced a very uneven surface, as it was nearly impossible to control the accuracy of the large spinning saw blade. This method was replaced by slicing machines by 1850 in most cities. 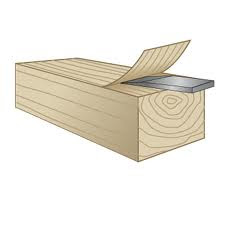 The slicing of hardwood veneers was made possible by the introduction of steam power. Slicing veneers requires that the log be boiled for several days in a pressure cooker. This boiling changes the character of the wood, and minerals and chemicals are removed in the process. When the log is removed from the boiling water, it is quickly placed on a table and a large knife is forced through the wood, slicing off a layer of veneer. This veneer needs to be dried and often ends up warped or wrinkled. There is no waste, as the entire log is sliced into useable material, so that is a commercial advantage. From 1850 to around 1995 the industry standard thickness was 0.9mm (1/28"). Since 1995 most veneer produced is much thinner, from 0.6mm (1/42") to 0.3mm (1/60") and even thinner. These thin veneers are now sold as paper backed veneer, since they are impossible to work unless they are glued to a backing paper material. The veneer which is sliced has no tool marks at all on the glue surface.
Also, when the knife slices through the wood, it bends the veneer and breaks the fibers of the wood. This is one of the easiest features to use when examining the surface of furniture to determine if it is sliced or sawn. Sawn veneer will never show overall cracks, but will break in a single area where the ground wood shrinks and breaks. Sliced veneer will always start to break over the entire surface, as the wood moves due to shrinkage and environmental conditions. These breaks are very small and can easily be seen in a raking light.