What Is A Chevalet Kit? 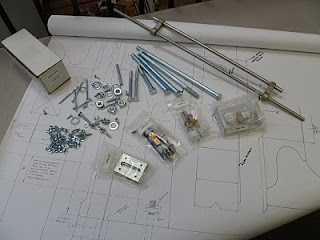 One of the first questions I asked, when I entered ecole Boulle and met Dr. Pierre Ramond, was "When was the chevalet de marqueterie first invented?" To my amazement and disappointment, he replied, "No one really knows."

Perhaps the invention was kept secret for decades, and the inventor died without recognition. Perhaps the French actually know, but still want to keep it secret. Perhaps actually no one really knows.

As I walked around the museums in Paris, looking at the magnificent workmanship in the marquetry surfaces, it seemed obvious to me that the chevalet de marqueterie, which must have included the saw support arm, was being used early in the 18th century. How else, I wondered, could such large and complicated work be executed? Certainly the illustration of the worker, shown in Roubo's book, holding a fret saw in his hand, did not explain it completely. Something was missing. Something was kept "secret."

One piece of the puzzle was found in reading Herbert Cescinsky's 1931 book, "The Gentle Art Of Faking Furniture." I prize this book, and it is certainly important reading for any collector who wishes to invest in quality pieces. On page 89, he writes, "The marqeterie-cutter's saw, in its guides, with the 'chops,' which open and close by foot pressure, to hold the veneers while being cut, and his seat at the end (the 'donkey,' as it is called), have (sic) hardly varied at all in two hundred and fifty years." That statement puts the chevalet de marqueterie invention as early as 1680, when the Dutch and English were busy making lots of "painting in wood" surfaces.

It also means that Andre-Charles Boulle had the chevalet, with the supported arm, in his workshop, and that it was in common use, since his shop employed some 60 workers at the peak of his career.

Regardless of the opinion expressed by an Englishman about the existence of some obscure French "secret" tool, the fact is that the chevalet de marqueterie has existed for more than a century. Generally, the worker made his own tool, but there were also tool dealers who would make and sell the same tool. It is also to be noted that this tool was almost exclusively used in the region of Paris, France. Very rarely does it appear outside Paris, from my research.

I was encouraged by Pierre to transfer this technology from France to America, at the time he retired from teaching. I take his suggestion seriously, and have made it my goal to introduce this wonderful and unique tool to anyone who would listen.

To that end I engaged a machinist to fabricate the necessary parts, like the sliding mechanism and the jaws and other parts which require machining. I also have collected all the odd bolts, screws, blades, and other elements of hardware which the tool requires. I then drew up a full scale set of very detailed blueprints, including notes on parts of the tool which require specific attention. I need to order a dozen of these kits at a single time to gain some advantage in cost, and, even at that point, I make about $75 profit each time I sell a kit. I also make a sturdy wood box to ship and can send this kit anywhere in the US for $50. The total cost of the kit is $500 plus the $50 shipping.

Each person then needs to supply the wood and put it together. I estimate it takes about $750 in wood and perhaps 2 weeks to do the job. It can take more or less time, depending on your shop and much less if you use scrap wood. The best wood is ash, beech or oak, and most of the large elements can be laminated from 4/4 stock.

The value of a complete tool is about $2500, and I have purchased and sold these chevalets over the years for that amount. I can tell you there is not much profit to be made in making them for sale, since it does take a fair amount of woodworking.

But, as they say, where else can you have so much fun for so little money?
Posted by W. Patrick Edwards at 10:19 AM

can you explain why ash, beach and oak makes good chevalet.

I have thick stock of butternut at hand and I wonder if that could be used for some parts, I also have harder 4/4 lumber like maple, cherry and walnut.

I use ash, oak and beech since it is fairly cheap and easy to work. Butternut is not good as it is relatively soft. Maple or walnut is fine, however, the saw frame itself needs to be flexible. I prefer beech or ash for the saw frame as it has a good amount of spring. Bending the saw frame when you install the blade creates the blade tension.

The horizontal arm, which supports the saw carriage, needs to remain very stable, so I prefer to use 4/4 ash or oak stock laminated together to make the beam. Also the upright jaw needs to be flexible, so when you push on the foot pedal it has enough spring to return to the normal position, and lift the pedal under your feet.