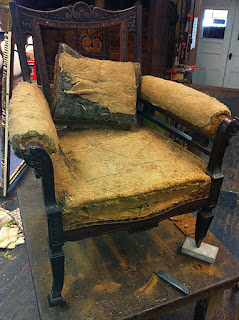 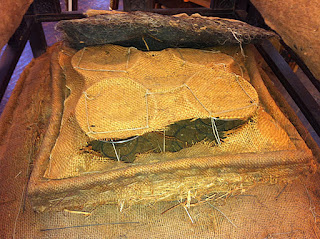 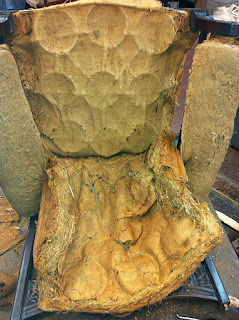 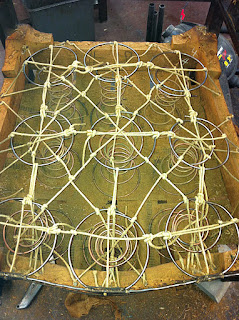 Of all the traditional organic materials used in upholstering antique furniture, perhaps straw is the most difficult to conserve. Straw was one of the earliest stuffing materials used, going back easily to the 16th century. It is commonly available, essentially free, and has fairly good initial resilience. However, it compacts over time and breaks down, so that after a century of use it is in poor condition.

Compare that with the best material, horse and hog hair. Even after a century of hard use, curled hair retains its shape, and is much easier to clean and reuse.

I have focused on conserving straw during my career, since it is a challenge and since it is often discarded by other upholsterers, so that a majority of antiques are being converted to modern, synthetic stuffings. Did I mention I hate foam and staples?

I just started a parlor chair from around 1885 which has its original straw foundation. This chair is from the decade after Turkish upholstery was the fashion. Turkish upholstery represented the high point of the upholsterer's craft in the 19th century and exotic and complicated forms of upholstery were produced, using expensive fabrics, trims and accessories.

This chair carries that style of upholstery on a decorative frame, with spring stuffed back panel and seat, and large arm cushions which curl around both sides of the arm support. These photos show the original stuffing foundation as I took it apart. The first photo shows the chair without its fabric. You can see the basic burlap covering on the seat, stitched with a wire front edge. The arms are also stitched. The back panel has been removed and is resting in place.

The second picture shows the back panel structure. The springs are surrounded by a hard stitched edge with straw stuffing. The horsehair is placed in the center of the top.

The third picture shows the chair laying on its back on my work table. The seat stuffing has been cut away from the springs and is folded back to make it easier to remove it. This stuffing is very fragile, since it is just straw and the burlap is rotten. I use care to keep it intact, vacuum it and transfer it back into its original position during the restoration. You can see the difference in the burlap which covers the springs now (replaced by an upholsterer some 50 years ago) and the torn burlap which is original to the stuffing, holding the straw in place.

The last picture shows the original springs and the method of tying them in place. This pattern is called "8 knot" tie, since each spring has 8 knots. Note the cords tie both the tops of the springs as well as all the centers of the outside springs to hold them in place under load. This is the way I was taught to tie springs. There is also a great deal of broken straw debris which sits on the top of the webbing. Fortunately, this chair was not used much after the burlap became torn. With most upholstery, and straw in particular, if the seat is used after the supporting burlap tears, the stuffing quickly becomes chewed up and damaged beyond repair.

This chair has been properly restored once before me, by an upholsterer who knew what to do, probably 50 years ago. He removed the stuffing exactly as I have done and removed the jute webbing from the bottom of the chair. He added new jute webbing, and then sewed the base of the springs to the webbing to hold them in place. He tied the tops of the springs using Italian cord and added new burlap to the top, stitching it in place to the wire edge and springs. Then he carefully returned the original stuffing to its original position. I will do the same, except I do not need to treat the springs, as they are still in good shape.

One of the clues that I am not the first person to work on conserving this chair is the chalk numbers indicating which corner blocks go where.

When you can feel the springs come up into the seat, stop using the chair. Take it to a traditional upholster and save the stuffing. It's the right thing to do.

I will post more during the restoration so you can see how I do it.
Posted by W. Patrick Edwards at 3:12 PM

Why do you place the old sometimes unusable straw and burlap back in the chair? Why not just install new straw and new burlap?

You are correct that in many cases the straw is no longer useable. However, in the case of this chair it is still fine. It depends on how torn up the straw is by the springs, which happens once the burlap is torn.

In this case, some time ago, the burlap which covers the springs was replaced, which saved the straw.

I am always trying to conserve original materials, wherever possible. In this case it works. However, if the straw is no longer useable and not available, I recommend replacing it with horsehair.

I know that is not "original" but at least the use of horsehair is typical and common at the same time that straw was used. Straw was a cheaper alternative to horsehair, so it represents an improvement.

If I was in Europe, I could easily get a supplier of "crin vegetal" which is used by any number of workers to make upholstery. It is just straw, and I do not know of a supplier here in the states.