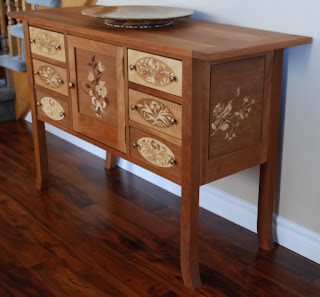 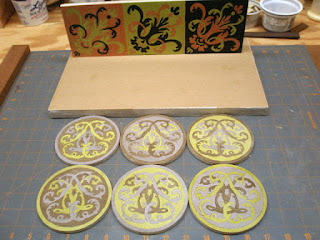 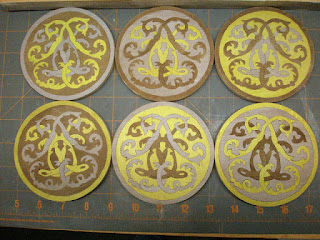 We have another class this week at the American School of French Marquetry. We only have one student, but classes are held no matter how many students sign up. Actually, it is fine with me, since this student is returning for his Stage II class. He originally took the Stage I class two years ago, and has used the Boulle method to decorate a sideboard.

Warren is a professor of electrical engineering at Georgian College in Ontario. He has a garage workshop and, like most woodworkers who are not professional, can only work on his projects in his spare time. Aside from some small Mission style end tables, this is the first large project he has done, and it took about 4 months.

He used the lessons from Stage I to adapt the Stage II designs included in the ASFM handout to the Painting in Wood method. Therefore, he made packets with both the background veneer and the different colors of woods for the design in the same packet. The design on the end of the sideboard is the "bird chasing a bug" design and the drawers have the "Williamsburg SAPFM Demo" design, while the center door has the "flowers with ribbon" motif. Normally these would be cut using the "piece by piece" (Stage II) method, and that would result in identical pictures. However, using the Painting in Wood method resulted in the same design, but each picture has different colors.

This week he is here cutting the rose, using the proper method, making three identical copies, with no saw gap. I expect that, when he returns, he will be able to take his work to the next level. After he took the Stage I class, he returned home and made his own chevalet from beech and ash. He had some help from the school where he teaches in making the more difficult metal parts.

As I write this, the sweet sound of his cutting mixes with the blues music on the radio.

Two weeks ago, another student, Matthew, returned home with his completed Stage I projects. I had recently posted a note about that class. I just received an email from him and post his comments here:

Message from Mathew Nedeljko:
Hello everyone! Just wanted to drop you all a quick line and say thank you again for the wonderful time at ASFM last week! Despite having a great time at the school I was not happy about bringing home a cold with me! What happened to the great sunny weather I have always heard about. Anyway, I have been working on completing the class exercises...thought I would send you some pics to keep you in the loop! Patrick, these are mounted with the hot glue, which I love working with. Obviously I am going to have to place another order soon! Thanks again for everything last week and I look forward to coming back for Stage 2 next year!

I have also posted his photos with this post.
Posted by W. Patrick Edwards at 9:51 AM

It's nice to see people using their new knowledge in their craft/work.
Paul