Treasure Box Series I (Part B) 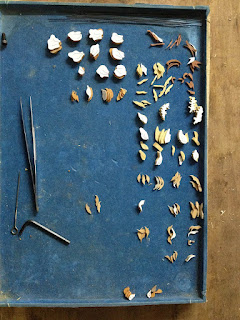 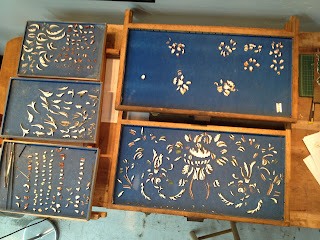 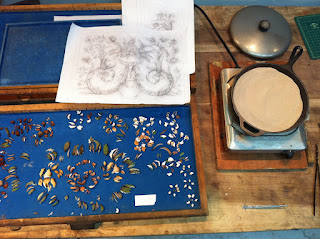 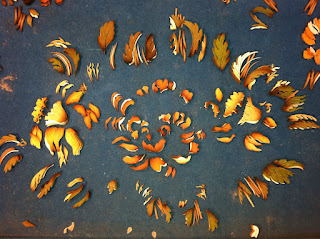 There are several things that are essential to the French method of making marquetry. Surprisingly, the use of the chevalet is not one of them. By that I mean that there are many French workers who make great pieces and do not use the chevalet. In fact, the workshop at ecole Boulle has generally replaced the chevalet with Italian jig saws. I discussed this in an earlier post, and showed photos of the new workshop.

In my mind the essential ingredients of a French process marquetry workshop are: hot protein glue, Kraft paper and trays. Lots and lots of trays. Large trays for all the parts for the design. Smaller trays for the cutting work and tools. Cabinets to hold the trays and tables to place the trays on. It seems that most of the work building these pictures involves moving parts from one tray to another or within the same tray, using tweezers and trying not to disturb the pile. With 4 copies of sawn veneer, it is fairly easy to keep them stacked up. With 8 copies it gets more difficult, as the stacks keep falling over and mixing up.

I found a coated paper which is blue and has a low flocking surface of some kind that works great. I don't know where I got it and I don't know where you can find it, so don't ask. However, since it is blue, it is easy to see the wood on the surface, even the small elements. Also the parts seem to stay in place and not move around. I just used spray adhesive to line the trays with this paper. The larger trays are from an antique typesetting cabinet. The smaller trays are just something I made from pieces of wood with an edge frame.

So, as the pieces from each packet are cut out they are placed in the small tray, which is at the chevalet. When that is full, these pieces are then transferred to the larger tray and placed in their respective position, according to the exploded design. It is very important to keep them in exactly the proper location, because it can become confusing in a hurry as the design gets complicated.

Now, looking at the design which has been shadowed, each piece is carefully placed in hot sand in such a way as to create the desired effect. The sand is very fine and uniform and heated as much as possible. We purchased a rather expensive hot plate, made in Germany, since the hot plates made in China did not create enough heat to do the job. The sand is about 1 inch deep and heated for at least an hour or more to create the proper temperature. Do not stir up or disturb the sand, as you want to use the even heat distribution (top to bottom) to your advantage for the proper look.

Only after all the elements of the picture are properly cut out, placed in their proper position and burned in hot sand do you begin to cut the background packet.

That is another post. To be continued.
Posted by W. Patrick Edwards at 11:41 AM