The Glue That Binds Us Together 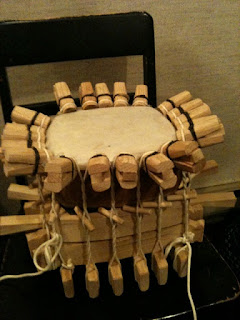 When I first had the idea of modifying protein glue with urea to extend the open time, it was driven by purely selfish motivations.  I wanted to use protein glue for my work, and the hot glue pot required me to work fast to get good results.  Also, if the phone or doorbell rang during a glue up, it was trouble, as I had to decide whether to stop and answer it or start the glue up all over again.

Therefore, I embarked on a series of empirical tests to see what formulation of urea, glue and water would produce the best results.  I cooked and tested and threw away 37 different batches of glue, at some expense, all the time keeping records and charts of my progress towards that goal of reducing the gel point to room temperature, without affecting the glue strength.

When I got the recipe right, it solved my problems.  At last I was able to use protein glues for restoration and fabrication without worrying about interruptions creating a problem.  It was particularly good at penetration of fine cracks in wood, and the extended open time allowed me to put together damaged fragments of broken furniture before it gelled.

I never thought I would start selling glue and end up in the glue business.  But, over time, other woodworkers found out about it, and I started giving it away.  Word quickly spread and, at some point, I got a call from Joel at Tools For Working Wood, in New York.  He was very persuasive and insisted that I put it in a bottle and label it so he could sell it.

I needed a name for the glue.  Frustrated at the commercial success that Gorilla Glue had achieved, in spite of the fact that it was toxic and difficult to use, I thought of an animal name.  At first, I thought of "Pit Bull Glue" since I have had pit bulls most of my life, and thought the image of a snarling mouth full of teeth would look good on the label.  Then I thought of "Old Yeller Glue" since I am old enough to remember the movie and crying when they shot Old Yeller, who had rabies.  That name didn't last long, since it would be confused with the standard yellow glue most woodworkers use.

That made me think of white glue, yellow glue, and of course, brown glue. Thus the name "Old Brown Glue" was created, and instantly was criticized by everyone.  "You don't use the term 'old' when you are trying to sell something!"  Really? I thought, I like old things.

Now the glue is being sold all over North America, by Tools For Working Wood, Rockler, Lee Valley, Woodcraft, and others.  I have had many positive testimonials and answered many questions about using protein glues.

Perhaps the most interesting thing that selling Old Brown Glue has done is to introduce me to such a diverse audience of people, beyond the regular woodworking crowd.  I have had questions about its application and use from an amazing range of creative people.

There was the research professor at Johns Hopkins University who called me one day, as I was chopping wood behind my cabin in Montana.  He was developing a machine to zap kidney stones, and wanted to use my glue to make "artificial kidney stones" so he could test his machine.

There was the American Indian, in Kansas, who wanted to use my glue to make an "organic" wooden rocket, whatever that is.  I told him it would probably work to make the laminated wood tube, but I couldn't guarantee that it would not burn up.

There was the contractor, in Florida, who wanted to use my glue to veneer around 12' tall fiberglass columns in his building, so they could be finished to look like wood columns.

There was the scientist in Norway who wanted to thin the glue and spray it.  When I asked him about his idea, he said he was working on a secret process and didn't want to talk about it.

There was the contractor in Los Angeles who ordered 3 gallons of the stuff...at one time.

Last week I received an amazing email from Catherine Thompson with the photos posted here:

I thought that I'd let you know that I used your Old Brown Glue to glue the hides to a Tsugaru Shamisen that I have recently completed making.
The traditional glue is a mochi rice glue for regular Shamisen with the recent addition of some other non organic ingredient for the Tsugaru Shamisen due to the higher skin tension in that instrument.
Your glue worked wonderfully. The open time was a godsend as it takes a good 30-40 minutes to fully stretch out the hide. As I was tightening the hide I put a damp towel over the hide. I am in Banff AB, where it is very dry at this time of year and I thought the towel might help with a longer open time.
Catherine

I wrote her and asked for more information about what she was doing.  I asked her if I could use her photos and text on my blog, and she said she would be "honored."  I was "honored" and amazed when I saw what she was doing and what kind of lifestyle she lived.  She wrote back immediately:

The instrument, Tsugaru Shamisen, is a sort of 3 stringed Japanese banjo. There are other types of shamisen but the Tsugaru version is the largest with the thickest neck. It was originally a sort of street musician's instrument with close connections to the Goze, blind women travelling musicians and Bosama, the male version. This connection with nomadic music making is what drew me to the instrument in the first place. I also live a nomadic life mostly in the west of Canada. For the past couple of years I have been travelling in the spring and summer across saskatchewan and alberta with 2 horses camping, exploring etc etc. Much of my work *(most of which is musical in nature) explores this sort of living and contemplates the continuing destruction of wild lands and ways to try and be closer to the land.


I remember watching Kung Fu on TV many years ago (40 years ago!), where David Carradine would walk barefoot around the wilderness playing his flute. As I watched her videos and listened to her music, made with native materials, I was instantly reminded of the zen peacefulness that David exuded (when he was not fighting bad people).  This lady, Catherine, is aa amazing artist, living the nomadic existence, wandering around the wilderness, making music that truly comes from the earth.

You should visit her website: Catherine Thompson Blog  and see for yourself.

I don't know how she found me, but I do know that it was the internet that brought us together.  What an amazing time we live in.  A true musical nomad and a woodworking luddite brought together by a shared interest in the glue that binds us.

I could have named it "Human Glue" but I can see where that might be problematic. 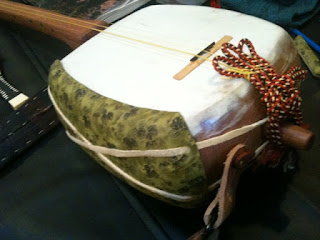 Nice post Patrick. And to think glue bringing such a diverse group of humans together.

She is a real inspiration. Thanks for this Patrick, and thanks to you, Catherine.
Paul