The day Kristen and I left to fly to Winston Salem, Patrice finished cutting out the ebony background packet and was ready to start putting it together.

This Treasure Box is twice as difficult as the first series Treasure Box, and it includes subtle complexities that makes it even more challenging.   Patrice and I have worked together on this project for an entire year to get it to this point, and we hope to complete the project, with four identical boxes by the end of this year.  Or sooner, if possible...

After the success in selling all four of the first series, we were encouraged to start working on the next series.  I selected the original box from a web search and began working on the box construction.  You can search back in this blog to see how long ago it was that I was cutting the full blind dovetails for the corners.

We decided to do the interior in bloodwood veneer and we found a nice large and colorful bloodwood board in Oregon to cut down for the solid partitions to match.  The design includes three birds, each different.  Two are sitting in trees inside the box itself.   One is on the top outside center, surrounded by bone inlay.

Patrice refined the overall design using illustrator, which produces a line composed of very small dots.  It is essential to use a dotted line to cut the pieces properly.  That is because we are using the Classic Method to produce these boxes, and, if you have been following this blog, you realize we are "cheating."  What I mean by this is that the original box, made in the late 17th century, was made using the Painting in Wood process.  With this process, you only are able to generate one copy of the design at a time.  In order to made these boxes "affordable" we are using the Classic Method, which the French perfected in the mid 18th century, and with that process we can make multiple copies all identical.

They look like Painting in Wood, but the fit is perfect since the saw kerf is eliminated, so an expert would be able to determine that they are not "of the period."

To cut out the background for the top, Patrice had to first cut out the elliptical bone cavity around the center bird.  Then he had to take apart the package and install the bone strips in each background.  Since the four backgrounds then had to be put back into a packet absolutely perfectly, with a new design placed on the front of the packet, there had to be some way to keep the alignment of each layer without any error.  I suggested using pins which would be placed in holes that were first drilled through the first packet.  Then Patrice was able to keep the second design in the right position by locating these pins.  It worked perfectly.  Absolutely zero error.

For more about this part of the job visit Patrice's blog here:Patrice's Lumberjocks Post

So, after cutting the packet for over three days, full time, he was ready to start putting the pieces together.  We flew to Winston Salem on a Wednesday.  On Thursday night we were looking for a place to eat and walked into a crab shack around the corner from the hotel.  As we looked at the menu, we were dismayed to find everything was fried.  When the waiter arrived and asked us what we wanted, we said "anything organic and anything not fried."  He kindly said, "You are in the wrong place.  You need to go down Liberty Street on the other side of the interstate and eat at Willows."

Boy, was he right!  We ended up eating there four nights in a row and enjoyed every bite.  For example, here is the "Grilled vegetable Napoleon -layered puff pastry, with grilled asparagus, grilled portabella mushrooms, grilled artichokes and fontina cheese, finished with roasted red peppers."  I had it twice!

So, as Kristen and I sat and enjoyed our delightful dinner together on Thursday night, I received the first photo of the marquetry that Patrice had just put together.  Kristen actually cried when she saw it and I stopped breathing for a few moments.  It was just too beautiful!  I know how the masters in the 17th century felt when they looked at their work.  One part of the brain (the technical side) focuses on the slight defects that are always present.  The other part of the brain (the artistic side) just smiles, knowing the satisfaction of a job well done.

To quickly review how we got to this point, I will briefly summarize the process we used.  After Patrice had completed the drawing, I laid out 32 different packets of sawn veneers and coded each part of the design with the appropriate wood.  The top has nearly a thousand separate pieces, and each had to have a color, keeping in mind the overall goal of making it look authentic.  I then glued each piece of the paper to the packets and fed them to Patrice, who was kept busy cutting 4 layers of each element over nearly a month of work.

He is responsible for placing each piece in hot sand to create the artistic shadow, as I no longer have the patience to do that part of the work.  It is an essential part of the process, but very tedious.  Patrice has the eye and understands exactly how the final result will look.  He did a great job.

At this point all the sides for the four boxes are assembled and all the tops are nearly ready.  The inside marquetry is done and glued down.  There is one last issue to resolve: green bone.

If you look closely at the marquetry you will see that a lot of the places where leaves should be are empty.  These spots will be filled with green bone leaves.  Also, in these places you can see small strips of ebony crossing the empty space.  These strips are "bridges" which are a feature of the Classic Method.  By leaving "bridges" in the design, the various elements of the background can remain exactly in the proper place until the worker is ready to install the proper element.  The worker just cuts out the bridge and installs the leaf, in this case.  We will do that as soon as we complete the process of dying the white bone a proper green.  Green bone elements were a very popular feature in late 17th century work.

I am so proud of this recent work that I want to show you some closeups, even though the work is not completely done.  Note you are looking at the back side of the marquetry, which is being assembled with hot glue on an assembly board which is covered in stretched Kraft paper.  When all the parts are in place, any gaps which remain will be filled with mastic.  Then we can remove the panels and finally glue them in place on the outside of our boxes. 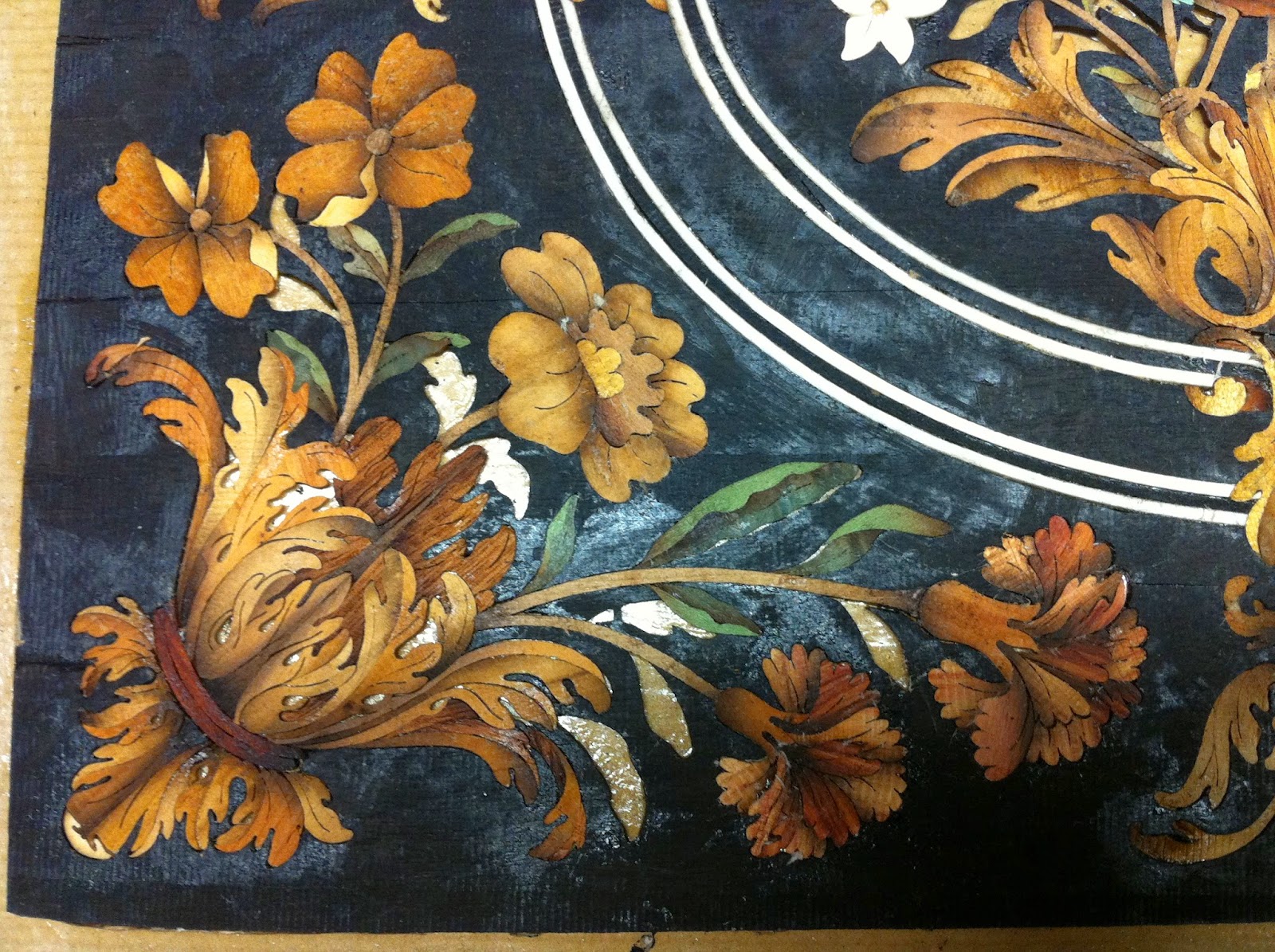 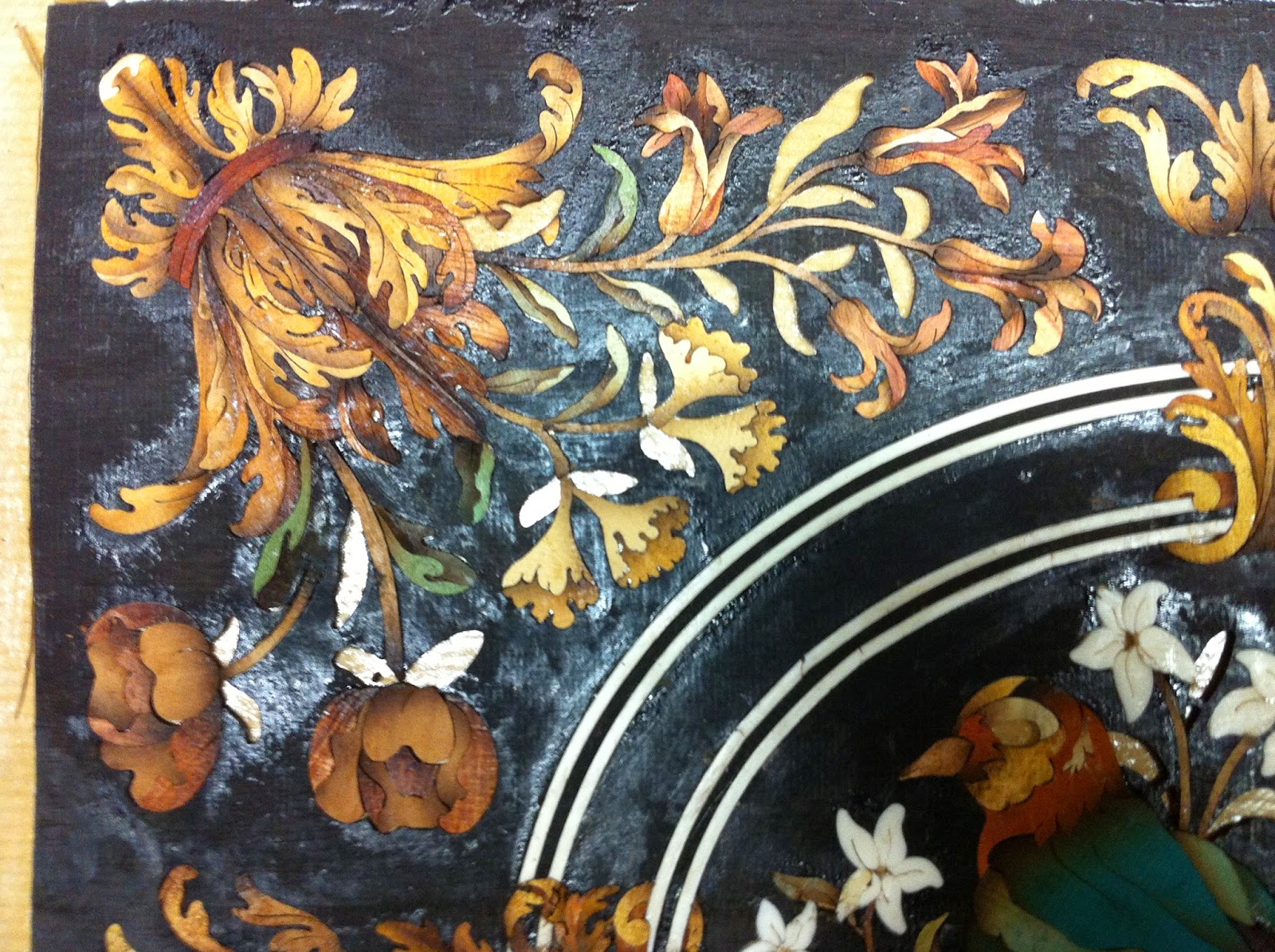 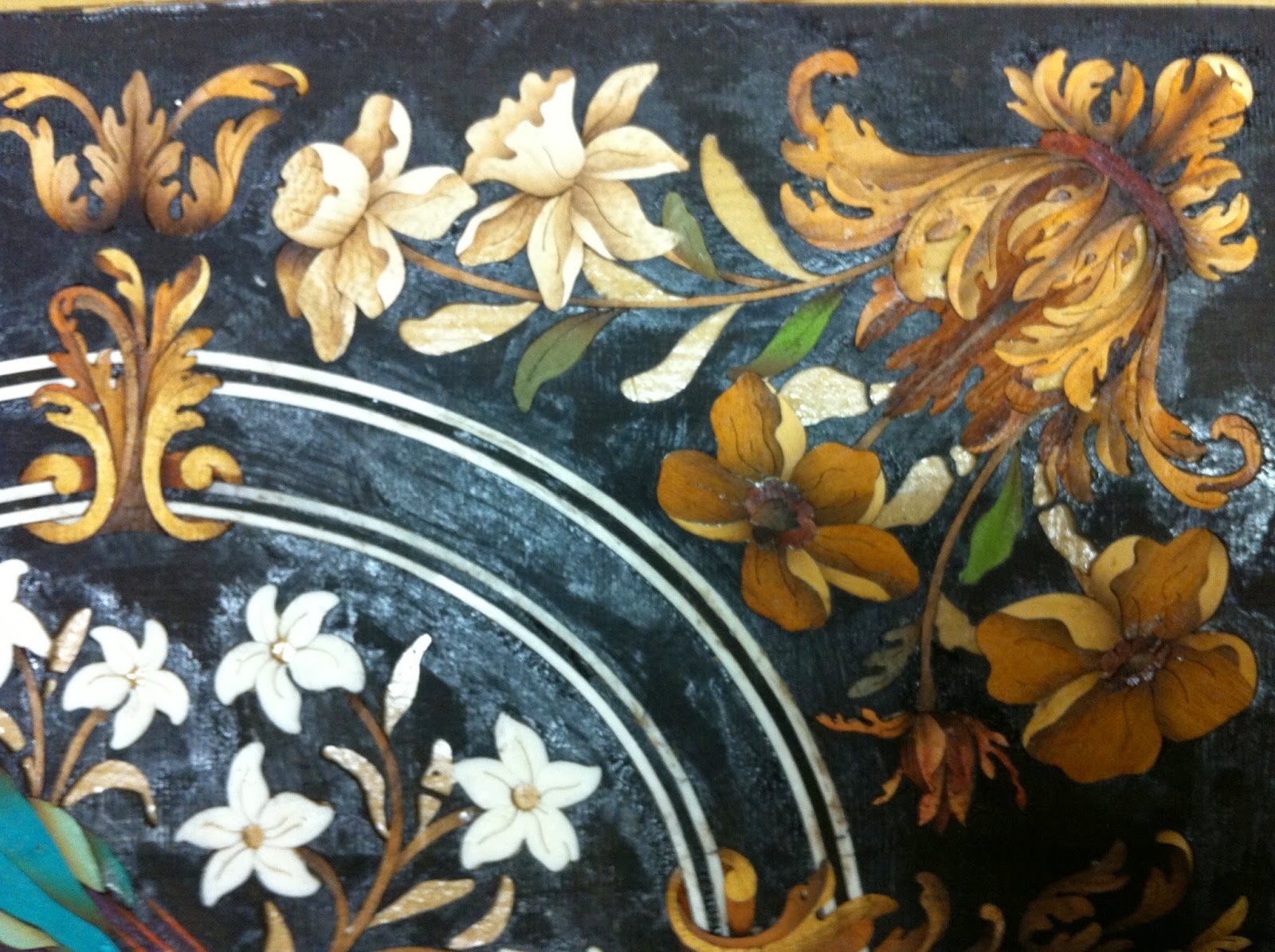 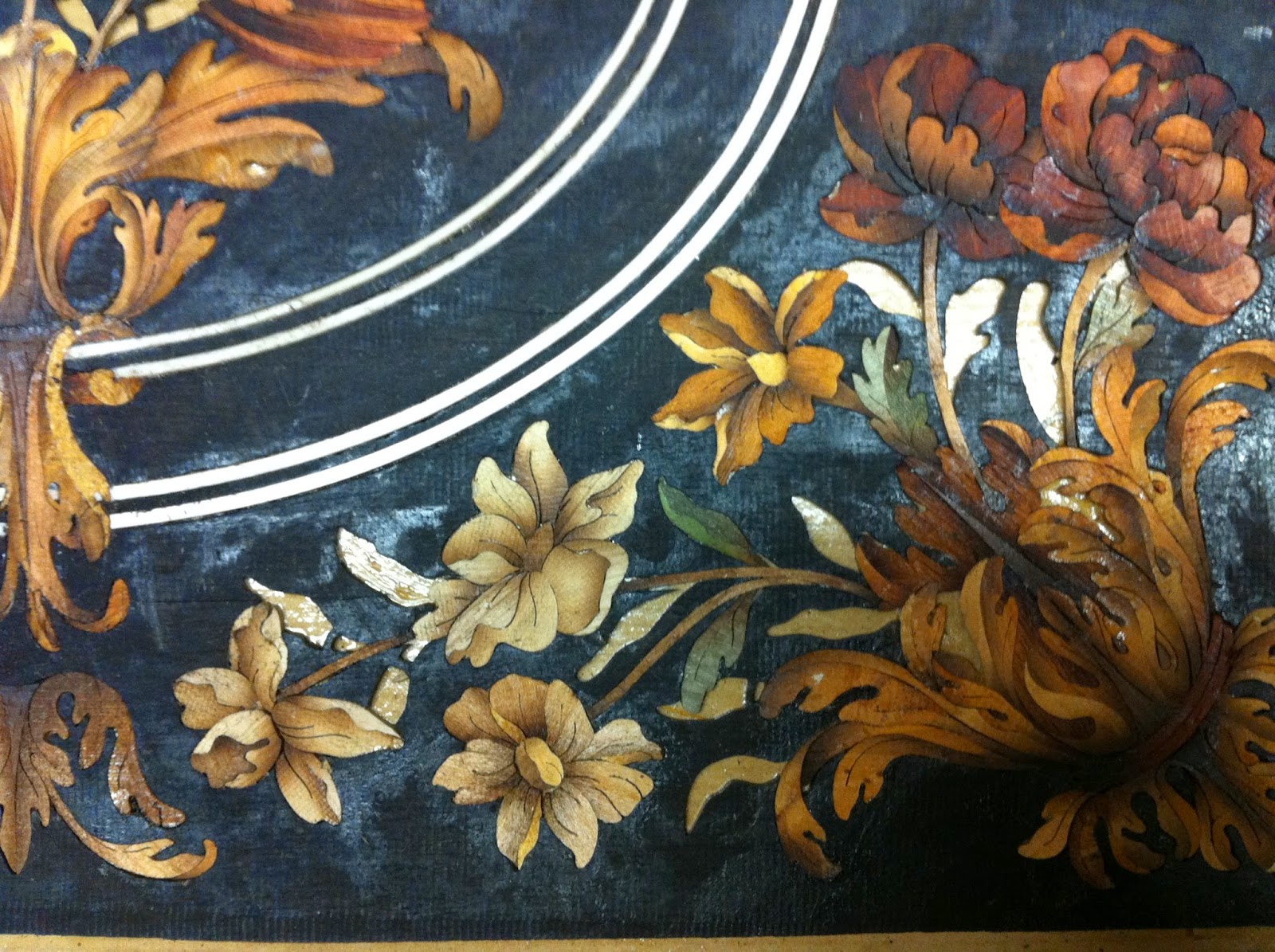 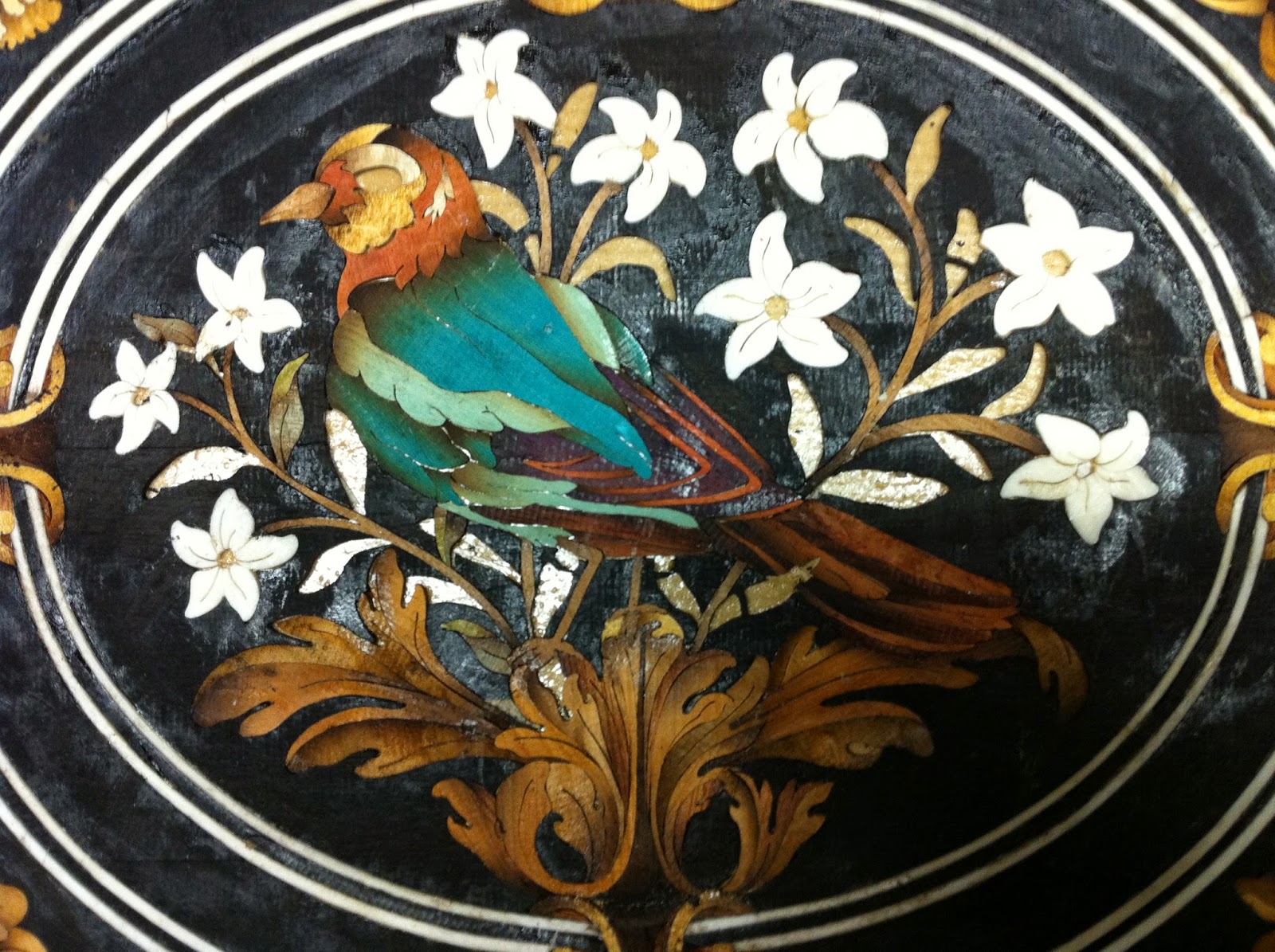 We are very fortunate that three of these boxes have been sold and paid for.  That means that there is only one Treasure Box Series II which remains available.  It is our hope that we will find a patron who is able to purchase the last box and perhaps donate it to a museum.  We believe that this work is worthy of being in a museum where it can be enjoyed by the general public.  I think it is very important in this modern disposable world that the public has the chance to view objects which will stand the test of time.  This work is equal to that produced centuries ago, as we have been very faithful to the craft.
Posted by W. Patrick Edwards at 11:02 AM

I used to use words for a living, but I am utterly speechless.

If I may edit slightly your last sentence, "this work at least equals that produced in centuries past". The students have now become the masters and well deserved.

I'll bet there were a lot more bridges to stabilize the background before it reached this level! Do you need any special dyes for the bone?

At least I don't think my eye is being fooled this time.

The picture of the meal is a work of art in itself.

Your and Patrice's talents continue to exceed my already lofty expectations! What's next?

Thanks for the inspiration. This is truly beautiful. Of all the excellence displayed here I am still most impressed with the quality of the shading.
Congratulations to you both in advance on this new antique.

The ebony strip(2 or 3 mm)between the bone strips is not ebony from the background? So Patrice has cut 2 cavitys from 6 to 7 mm?

I sincerely appreciate the comments, and am happy to share this work progress with you. The last comment by Filip made me want to add more detail, so I put in a link to Patrice's post which is on Lumberjocks.

It has a lot of pictures which may help to explain what we did. If you don't know about it, the site Lumberjocks has a great thread under the "Chevy Clubhouse" name. It was started by Paul Miller and has been a great forum for woodworkers who want to use the chevalet.

one of the most spectacular artistic creations I have ever seen. I very rarely ever comment, thank you for sharing your passion. Chuckerb