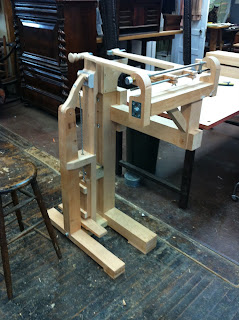 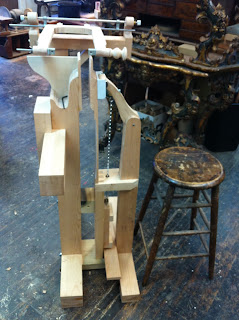 One of the highlights of my various trips to Paris to study with Dr. Pierre Ramond at ecole Boulle occurred in the spring of 1996. I had just arrived and was visiting my friends at the Musee des Art Decoratifs, next to the Louvre. As I walked into the conservation lab, each of the workers walked up to me and shook my hand, congratulating me on my success. I had no idea what they were talking about.

I was shown a copy of the newly published volume II by Pierre, "Chefs D'Oeuvre des Marqueteurs" (Masterpieces of Marquetry) which included my photo and a brief paragraph on page 62, talking about marquetry cutting saws.

It read: "The marquetry donkey is a typical instrument of the Faubourg Saint-Antoine. Unknown to provincial and foreign marqueters, it is remarkably light and easy to move." And: "The perpetual transfer of techniques between continents can be illustrated by Patrick Edwards' equipment." I was being celebrated for exporting the particular Parisian technology of cutting marquetry using a chevalet.

Later, when I started the American School of French Marquetry, I built several different sizes of chevalets for the students, and hired a machinist to make the specialized hardware elements for this tool, putting together in a kit all the hardware and blueprints for sale. This made it possible for interested woodworkers to easily put together a chevalet for their own use.

Over the past decade I have sold nearly 50 kits, so I can only wonder how many of those are built and operating in North America where there were essentially none before. I know that this tool has been kept "secret" over the years, and there were a small number of artisans who knew about it or had one for their own use. However, with the internet and the classes being taught here, it has become more mainstream. The reception has been fantastic. Everyone that sees it is amazed by its operation and wants to try it.

After coaching hundreds of students in its use, I realize that since it requires some physical abilities, I must adapt my methods to a wide variety of human limitations. In ecole Boulle, all the students are young, energetic and able to operate the tool without any difficulty. In my school, we accept all ages and abilities and some of my students arrive with "limited" physical abilities.

One of the requirements of using this tool is arm strength. To set the blade tension you need to grab the outboard arm of the wood saw frame and pull it towards your body, using the biceps muscle. The knob on the inboard side of the saw frame is placed on the upper chest and the saw is squeezed together and held while the other hand tightens the saw blade screw. When released the tension of the blade is tested by plucking it to hear the pitch. It takes some dexterity and a certain amount of arm strength to do this, but, when mastered, it means the blade can be set up easily and quickly.

Another requirement is good eyesight, as well as eye/hand coordination. Using the Optivisor solves the eyesight problem, but coordination is another problem. Either you have it or not.

Probably the most "comments" I receive involve the wood seat. People who lived in the 18th century loved the solid wood seats on Windsor chairs. They were everywhere, they were durable and they were comfortable. I wonder if people who lived at that time had harder butts...One thing is sure, people today have soft butts.

Anyway, we have an assortment of cushions here for some students to use while cutting. There is no shame. When I built my first chevalet in 1976, I upholstered the seat in leather. All the chevalets I have built since have standard wood seats. One of the problems with the upholstery is that it is difficult to slide around and change your position as you work. Also, like riding a bike, after a few hundred hours of working on a wood seat, your body "adapts."

Another requirement for using the chevalet is using your feet. The feet need to rest on the pedals and hold the clamps tight against the work. Therefore, a person who was paralyzed from the waist down couldn't use the traditional tool.

It took me some time to work out the mechanical details, but this is the tool I just finished. It is a traditional chevalet except for the seat. I needed to add a second foot for stability, but it seems to work fine. In addition, it takes up less space in the shop, and you can use any type of seating that is comfortable for you.

Brilliant! The form is similar to the "portable" version from American Woodworker some years back which I have been working and yes, struggling with for too long. But it has the primary attributes of the full form chevalet which are rigid frame structure, a good saw mechanism and it stands by itself not needing an extra stand or bench to support it.

I see a few other advantages for some folks as well. It can be stored out of the way more easily and if you use a piano stool (mine is padded) it can swivel and can be adjusted to a comfortable height and thus serve different cutters.

I may have to give more consideration to building a proper chevalet at least so I will not embarrass the ASFM further.

Good point, Chuck. It does take up less room and is a serious alternative to the American Woodworker article I published so many years ago.

The only drawback I can see at this point is the lack of a seat makes it more prone to vibrations, as the person sitting on the tool tends to hold it in place. This could be solved by adding some weights to the feet, or attaching it to a small piece (3' x 3') of plywood that the chair could be placed on for stability. Another alternative would be to clamp it to the side leg of a work bench when in use.

In any event, it solves the physical limitation of this particular student.