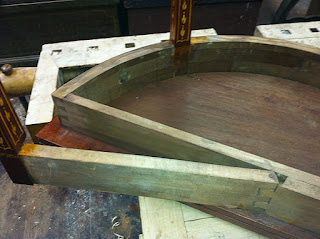 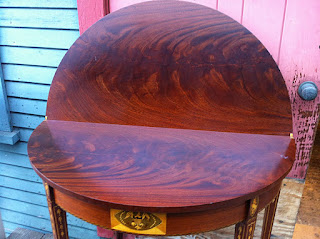 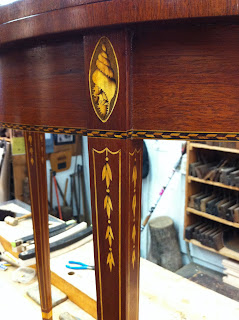 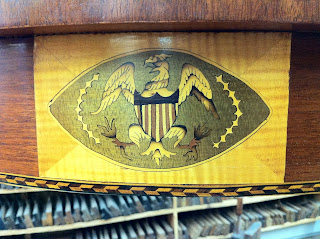 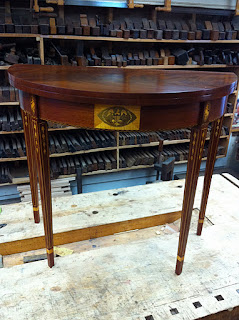 I am always ready to preach the virtues of animal protein glue, as well as traditional hand work.

I have written numerous articles on using glue and relating my experiences over my career with this unique material.

It occurred to me that, in Europe, the lessons of using natural glues were handed down from grandfather to father to son, but in America that tradition was not so common. More often than not, American woodworkers get their information from reading articles, other woodworkers, or too often, from the young salesman at the hardware store.

Since the early 20th century, American woodworkers have been using synthetic glues, some of them toxic, none of them really reversible, instead of cooking glue in a double boiler.

Therefore, I decided to write an article on what your grandfather neglected to tell you about protein glues. It appeared in Issue #197 (March/April 2008) of Fine Woodworking under the title: "Hide Glue, Age-Old Technology Has Unmatched Advantages."

Since some of the features of hot glue are its fast tack and easy clean up with water, as well as the fact that it doesn't stain the wood and is transparent to finishes, it is perfect to use for inlay, and hammer veneering techniques. So I needed a project which could put this glue to good use, and selected a simple Federal card table.

I had in stock a quantity of nice large Honduras mahogany crotch veneer, and I picked out three matching sheets for the top. It was a simple matter to shape the apron and legs at the bench and I used the liquid Old Brown Glue to glue up the bricklaid apron elements. I went through Montgomery's American Federal book and found some designs for the shell and eagle marquetry features. Those were cut out using the "chevalet de marqueterie" and shaded in hot sand for dramatic effect.

After the article was published and the table was finished, I sold it to a client who lived in Reno and delivered it there before I could even get a good photograph of it for my use. Years went by and I forgot about the table, until this client moved to San Diego and asked me to pick up the table for cleaning.

Now that it is back on the bench, I am pleased that it looks "right" and that the workmanship is "not bad". It could use more polish, as I only put a few thin coats of shellac on it before it left the shop. After a good cleaning and more polish, I expect it to look even more authentic.
Posted by W. Patrick Edwards at 10:59 AM

Beautiful as always. Patrick, I've been meaning to ask you about whether your Old Brown Glue is suitable for bent lamination. I am starting something soon that will using that technique. Is OBG going to creep on me?
SFPaul

Good question. I have been experimenting with lamination techniques for years. My experiments have shown that "springback" is a result of glue tack and not the assumed reason that wood wants to return to a straight form.

My conclusion is that, if you use a glue that tacks over before all the laminations are bent to shape, then the glue tends to pull the wood back to the (flat) shape it was in when the glue tacked up.

However, if the glue remains completely liquid during application on all surfaces and subsequently the lamination is shaped into the caul, the glue will then set firmly and prevent any "springback" at all.

This is a good reason to use Old Brown Glue for bent laminations. If it is sufficiently warm during application, it remains liquid, allowing the wood to slip into its final shape during clamping. Then, with loss of moisture, it cures and the wood remains perfectly in shape.

Also, remember that animal protein glues, in general, resist creep or sheer forces better than all other synthetic glues.

Don't take my word for it. Try it and see for yourself.

Thank you..And I will.
Paul

Recently I had to "undo" a frame and panel door from an older, well built cabinet (discarded by someone in the name of remodeling.) During this process, I had that epiphany moment regarding the need for me to begin using hide glue in my projects.

However, I have a question regarding traditional methods (it must be only theoretical since it doesn't appear to adversely impact true antiques.)

I tried denatured alcohol to undo what I believed to be hide glue (it turned out to be PVA or something modern) and I noticed that the shellac finish was softened (this wasn't surprising.)

My question is: "Why doesn't the alcohol in the shellac adversely affect the hide glue joinery, since alcohol is its kryptonite?"

Recently I had to "undo" a frame and panel door from an older, well built cabinet (discarded by someone in the name of remodeling.) During this process, I had that epiphany moment regarding the need for me to begin using hide glue in my projects.

However I have one theoretical question regarding traditional methods (it must be only theoretical since it doesn't appear to adversely impact true antiques.)

I tried denatured alcohol to undo what I believed to be hide glue (it turned out to be PVA or something modern) and I noticed that the shellac finish was softened (this wasn't surprising.)

My question is: "Why doesn't the alcohol in the shellac adversely affect the hide glue joinery, since alcohol is its kryptonite?"

The use of alcohol to "undo" hide glue is interesting. It is true that using alcohol will eventually allow the glue bond to break. It actually doesn't "reverse" or soften the glue. In fact, it acts to further remove the water molecules which remain trapped in the glue, thus making the glue brittle. Only water and heat together will truly reverse the protein glue, from solid to gel to liquid states.

Yes, you need to use hide glue in your projects.

Dear Patrick,i am Julian of Spain,i to buy dry hide glue 192 grms.¿You think about the use os acetic acid to extend the open time of the hide glue?¿whisch is better,the acetic acid or urea?.Thank you,best regards.

Good question. There are many different kinds of additives which can change the characteristics of animal protein glue. Remember, protein glues have been around for thousands of years, and one reason is that they can be modified easily for many different uses.

When I began my research, I was part of a group in Paris which was concerned with marquetry conservation. I also found a lot of information in a French book from 1959, "Traite General de la Fabrication des Colles". I do not know of any English or Spanish version of this book, but you can search on the internet. The author is Dr. Maurice De Keghel.

I chose urea to modify the glue since I believe it does not adversely affect the strength of the protein molecule. All my experiments have been with urea.

When using acids to modify the protein glues, several problems can occur. Animal protein glues have lots of strong hydrogen bonding sites, and acids can change the viscosity of the glue as well as the pH.

I tried to keep the formula for Old Brown Glue as natural and non-toxic as possible, as well as ending up with a relatively neutral pH. It took 37 different formulas before I got what I wanted, and the current recipe was perfected at batch 104. Currently I am shipping batch 157.

I am very happy with the results, and so are a lot of woodworkers.

Dear Patrick,thank you for your answer.I have experienced with the acetic acid and the glue is very srong,and do not appreciate change in the cuality of the joint.But you are an very expert in the hide glue and i will use urea in the future.¿You know that the joints made with adiction of acetic acid can fail over large time?Best regards.