A Tool You Don't See Everyday

If you have spent the time to read my early posts on this blog, you know that I first got interested in antique restoration by visiting an 80 year old upholsterer from New York and watching him work.  The way he manipulated the materials was fascinating.  His workshop was just around the corner from my house, and I would stop by just to sit and watch him do his job.

He was at the end of his life and career, but his hands were amazing.  They were huge and strong and looked like they belonged to a much younger man.  The way he would stretch the webbing, spit some tacks and sew the springs in place was like music.  A constant and fluid movement of work, without any wasted effort.  He would take several strands of Italian cord at the same time and tie the coiled springs into position, pushing them down with one hand while he quickly tied the cord into knots with the right.  Eight knots per spring.  I remember him telling me that "some guys only use 4 knots, but that won't hold long."

The most wonderful part of the job was working the horsehair into its place, stitching it perfectly in place to form the appropriate support and form.  He would pull and pick the hair with both hands so that it resembled a hairstyle from the 1950's, sitting up some 8 inches in the air.  Then, when the upper burlap was tacked in place and the final stitching was done, it pulled down magically into a firm support which was only a few inches thick.  Pulling the tufting twine over a hard cake of wax, he would use either a large curved needle or a double pointed long needle to work along the edge, stitching different rows of twine to properly shape the hair foundation.

Most workers these days don't even know where to get horsehair, and, if they had some, wouldn't know what to do with it.  Foam has transformed the trade.  I don't even want to talk about using staples.

From time to time I will get a call from a client who wants to get rid of an old horsehair mattress.  They know I can use it and don't want to just throw it away.  Years ago there was a good business in the East Coast cities where traditional mattresses were made by hand.  These mattresses were expensive and time consuming, and consumed a lot of horsehair.  Again, foam has replaced this work, and these mattresses have no value.

However, I like to recycle them.  I follow a process that allows the hair to be used again safely.  First, I have the mattress fumigated for 48 hours in a chamber using methyl bromide gas.  This kills all the bugs, if they exist.  Then I open the mattress, and remove all the twine and any cotton batting, separating the hair.  This hair is placed in a large clean plastic trash can and washed with Tilex.  Then the hair is placed on a long rack with a wire screen to drip dry in the sun.

When dry the hair needs to be pulled apart and the perfect machine for that is a "cardeuse." 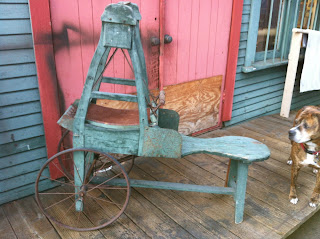 Not everyone has one of these available.  Generally, they are found more often in regional festivals in rural parts of France.  Sometimes in museums of trades.  Google "cardeuse" and see for yourself.

My first experience with this tool was over 30 years ago.  There was another upholsterer in town who had a similar machine, but it had a large drum studded with sharp spikes and the bed was also studed with spikes.  By turning the handle the drum would spin at a large rate of speed and you would feed hair into the spikes with the other hand.  It was like one of those chipping machines that eat trees.  Scared the crap out of me.  Out the other side of the drum the hair would fly in all directions, filling the room with horsehair.  What a mess.  I immediately thought I would like to have such a tool, but he refused to even consider selling it. 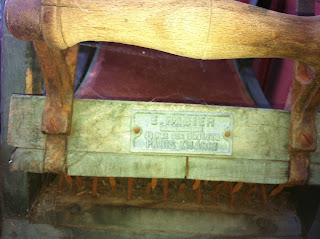 This particular cardeuse belongs to a dear friend of mine, who also graduated from ecole Boulle.  She moved to San Diego and practices traditional upholstery out of her home.  Last week, when I paid a visit to see her, I noticed that her tool needed a little work.  Since I would like to use it, she gladly let me take it for repair.   Note it was made in Paris, probably in the 19th century. 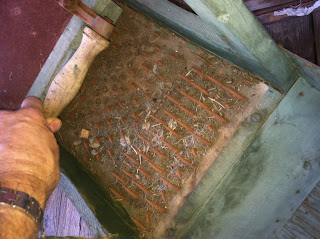 The worker sits on the bench and moves the sliding arm back and forth.  The bed of the tool has lots of iron spikes in rows, bent into hooks.  Half of the hooks go away from the worker and half go towards the worker.  The sliding arm has a ratchet system to raise and lower it relative to the bed, depending on the type of hair being carded. 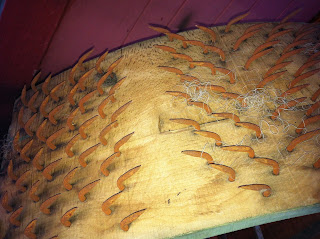 The sliding arm has a similar arrangement of spikes, which are in rows that pass through the rows of spikes on the bed.  This action, you can imagine, shreds the hair completely. 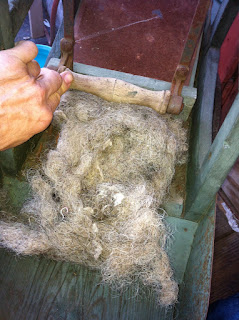 So, I sit down and start putting clumps of hair into this machine and moving the arm back and forth.  It is a very interesting pastime.  Hair goes everywhere.  You are constantly reminded about the dangers of the spikes.  There is no temptation to daydream while you work.

Lockjaw is not a pleasant way to go.

POSTSCRIPT:  The internet is an amazing system for connecting like minded individuals.  I have a friend in Belgium, Filip, who is an ebeniste and marqueteur.  He took the time to travel to San Diego and visit my studio, which was valuable for both of us to share our common experiences.  I had no idea he was into upholstery.  After this post, he sent me an email telling me that this machine is missing an important part: the safety guard.  Kind of like a table saw without the guard.  As I do not want to be the cause of any injury which may happen by some other person building such a machine without the safety guard, I am adding this photo he sent me to show the part.  It is a bar, held by metal straps which prevent the user's hand from getting too close to the spikes.  Very interesting! 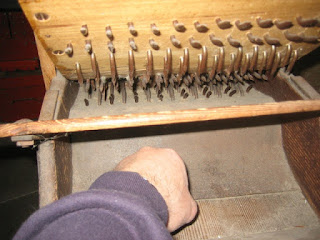 Patrick,
Here is yet another miracle of French technology you have taught us about. Who knew? One look at the hooks on it tell you it is not your typical wool or linen carder.

What next? Once you have carded horsehair, will you spin it and knit the proverbial hair shirt?

A video of this device in action would be welcome. Oh, and do keep your tetanus shots up to date!

Are you sure this did not come from la Bastille?