Forward Into The Past!

I take this job of blogging very seriously.  One thing the internet has provided the globe with is a chance to share a virtual collective consciousness.  That is why my personal contribution is so important.  Not because I am important, but that I may, in fact, contribute to the universal search for our place in the universe.  Defining our cosmology in a way that accepts truths and supports individuality.

I have had some significant influences in my life that have contributed to my own understanding of my place in time.  Some have been superficial, like music, for example.  Coming of age and forming my persona under the sound tract of Pink Floyd, Cream, Traffic, and, most importantly, Hendrix, mixed with all night visions created by the Firesign Theatre can be very mind expanding.  (If you are old enough you recognize the title of this blog as a Firesign Theatre cut.)

If you have never heard of them, take some reflective time and close your eyes, darken the room, partake of your favorite mind altering material and just listen to the mental movies that classic Firesign Theatre stories create.

There have also been personal influences, as I have written about before.  When you seek out a "master" and sit at their feet to humbly seek their wisdom and they treat you as equals, it can be very inspirational as well as educational.  There is a rare mix of humility, knowledge and confidence that makes a student ready when the time comes to evolve into a "master" in his field of experience.  Schools try to create this with educational programs that award degrees, but that does not always guarantee success.  What is important is how you live your life and what you do with your precious time here on earth.

One of the masters I learned from came to me over the television.  The first time I turned on the Woodwright's Shop program on PBS, more than 20 years ago, and saw Roy Underhill frantically working a piece of wood into something, using only hand tools and his copious sweat and blood, I was transfixed.  Here was a guy that I could instantly relate to.  His show depicted exactly what my life was on a day to day basis.  He loved what he did.  He understood the larger implications of what it meant to work by hand, with the element of risk.  He studied and explained the old ways of working in a way that was easy to understand and appreciate.  In short, he was a true brother in arms (Dire Straits). 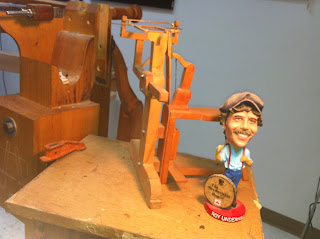 Over the years, I watched Roy every chance I got.  I saw him build boats, cabins, chairs, tools, spinning wheels, whistles, lathes, and every thing else under the sun.  Each episode started with him walking out of the city and into his shop in the woods.  He worked the camera in a way that made me feel he was in the room with me, talking only to me.  I often found my self talking back, having a conversation with the TV.  It felt normal and still does.

I first actually met him when I joined the American Woodworking magazine traveling show.  I know he has a lot of fans, and yet, when we met, I found him to be honest and personally interested in my perspective.  One truth about a master is that he listens.

I was honored when he asked me to present my chevalet and marquetry experience on one of his shows.  I think that was in 2008, but my memory is not clear about dates any more.  I stayed with him and his wife in Williamsburg and we had long and deeply personal conversations late into the evenings.  When we taped the show, I was able to learn a great deal from him, even though I had a fair amount of television experience in my past.  He is certainly a master at presenting information in the most entertaining way possible.

Last night, I found a TED talk which featured Roy working the crowd.  It reminded me again of his skill at public speaking, while at the same time using an axe to skillfully demonstrate traditional workmanship.  I have personally seen him do this talk on several occasions.  At one of these talks, I was the person holding up the tree, while he took swings at it.  Seeing his abilities at close range make this presentation even more remarkable.  He can place the chips from the axe exactly where he wants, much like a professional golfer can place the ball on the green.  All the time blending his act with serious information and classic bad jokes.  Each time it is fresh, and he has done this thousands of time.

As I watched the TED talk, I sensed a certain resolve in his voice.  He has been "preaching" the virtues of hand workmanship all his life.  He is the most public face in woodworking for this position.  His show is the longest running PBS "how to do it" show, and yet Norm, with all his ridiculous and expensive power tools, has much more success and fame.  When Roy describes his axe as "a piece of metal on a stick" he brilliantly illustrates his position.  That "metal on a stick" can do almost anything, if you know how to use it.  Nothing illustrates more the relationship between man and tool than that axe in the hands of a man like Roy, or the image of Norm standing in the middle of hundreds of thousands of dollars worth of power tools, trying to make a bookcase.

I was raised and trained as a scientist.  I studied and worked in the field of high energy particle physics and my degree is in Applied Physics.  I grew up immersed in the world of technology.  I saw the first computers and was born at the same time television was introduced to the world.  I watched live as the first man stepped on the moon, and the first heart transplant occurred.  As a scientist, I understand that the industrial revolution has changed not only the social and economic fabric of the past two centuries, but is now actually transforming the global climate, and that it is measurable.  We cannot continue to burn fossil fuels at an increasing rate, just to satisfy our need for mass consumption of useless objects.

Roy, in his TED talk, says, rather ironically, that he was asked to represent the "Past."  He then succeeds in pointing out that the past is still relevant today.  The past is the way of the future.  We can learn from the past and use that knowledge to mitigate our footprint on the earth.  We can, and must, transform our relationship with our home planet, by better understanding our relationship with our global assets, like food, water, and air.  If we are just custodians of this planet, what kind of message are we leaving our children if we destroy it?

I am not crazy and do not want to eliminate all technology from my life.  Living an extreme lifestyle is not the answer.  I read the book, "Be Here Now" in 1971, the same year I graduated from UCSD, and I understood what a life, in "balance" meant for personal happiness.  I still follow those guidelines.  That is why I can relate so much to Roy, and what he represents.

We all can learn from what he has to offer.  He is a national treasure.

See for yourself:
TED: Roy Underhill and his Axe

Thank you for this, Patrick. I appreciate most of all your ideal of balance.

This video was and still is amazing. It's men like yourself, Roy Underhill, Philip Lowe, Peter Follansbee, Don Williams, and several others that the crafts still excels. Thank you for your willingness to share and educate. We as students of the craft are grateful for all you have done, and it has been an honor getting to know you as a person and a master. Let the Purple Haze live on.

What Fred said goes double for me! Thanks for everything you all do! That means Patrice too!

Amazing work sir, I am one of your followers and I have learnt a lot from you, trough this blog, thank you very much !

Replacing the tambour roll canvas on a roll top. However, there is no end piece that stays in the desk slide itself. I have the starter piece, but thats it. Can I fabricate a piece? If so, why thickness and width do I need?

The end of the tambour roll needs a wood strip to hit the mechanism for the lower drawers to lock and unlock. Most desks have lost this mechanism or it is broken. Usually there is a simple piece of wood which sticks up through the back of the writing surface, so that when the roll is fully open the back strip on the roll falls down on this plunger, unlocking the drawers.

It only needs a piece of oak a little thicker and wider then the normal strips. Measure the distance from the back of the roll (last strip) to the top of the writing surface when the tambour is fully open and you will have the proper width for the last strip.

Thanks for the response. I'll give it a try and let you know how it ends up.

Looked at the locking mechanism today. Dropping a piece of wood on it is fine, but looking at the drawers, the male clip has been removed. So there is really no issue with locking the draws. i just wanted to restore it to its original design intent. Tanks for the insight and assistance.