Patrice and I have been discussing for two years what we wanted to do to celebrate the completion of the Treasure Box III project, and I have been planning for longer than that how I wanted to celebrate 50 years in business.  We decided to spend three weeks in the Andes Mountains in Peru.  Part of that trip was spent hiking the Inca trail into Machu Picchu.

Fortunately, I am in pretty good shape, and have never had any problem with altitude sickness.  I raced bicycles for 35 years and have walked to work every day for longer than that.  Patrice and I have been camping and hiking for some time, and along with our friend Anna, we are known as the "Middle Earth Tourists."  Unfortunately, Anna had to work, so we had to go without her.

Hiking along the Inca Trail is a dream of a lifetime.  Just thinking about the civilization that created cities of stone and connected them with thousands of trails, paved with rocks, which are still intact after more than 500 years of use, boggles the imagination.  Not only were they able to transport stones which weigh as much as 70 tons up and down thousands of feet of mountains, they somehow were able to fit them together as tight as I fit together small pieces of veneer.  I have no idea how they were able to do this.

As I hiked along the stone trail, I gradually moved back in time, soaking in the sounds of the jungle and breathing the rarefied air of the mountains.  Modern problems faded away.  The spirit of the Inca philosophy took over:  Don't Steal.  Don't Lie.  Do Not Be Lazy.

Along the trail we found ruin after ruin, left standing after centuries.  Each one was carefully laid out, with windows, doors, stairs, and even bathtubs with running water.

When we reached the Sun Gate we were able to see Machu Picchu for the first time.  It was shrouded in clouds and mist, and as the sun broke through in the early morning, it revealed itself completely.

We had perfect weather during the entire trip and were fortunate to have excellent guides who educated us about the history of the site and the culture of the Inca civilization.
During the trip, I was drawn to the mountains, and had some wonderful dreams.

Standing in the city of Machu Picchu, I felt a strong urge to create a Haiku poem about the experience.  I offer it here for others to enjoy.  We were there during the Summer solstice, June 2019, when the Milky Way lined up perfectly with the Sacred Valley.  A great time to be alive. 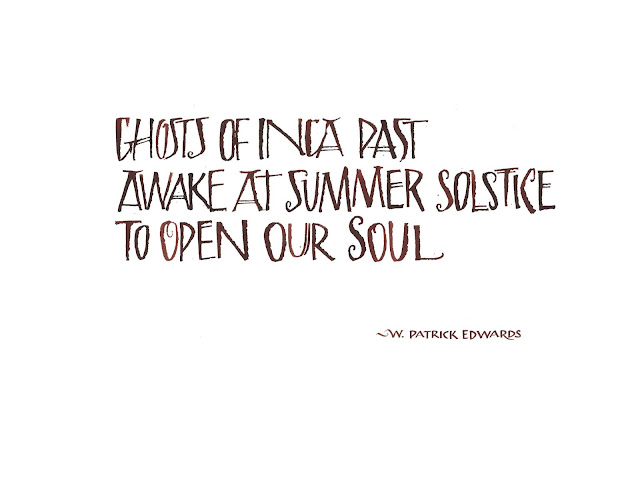 What a great way to celebrate what you do, not by resting on a beach, but by exertion in a different and refreshing way. The stonework in Peru is awe inspiring, especially to other makers. Once again, the deeds of the ancients and their lost arts reveal that the dismissive "that's the old way" is foolish hubris, they were no slouches.