I am encouraged that more and more American woodworkers are interested in a weird, highly specialized veneer cutting tool that the French developed during the 18th century and perfected in the 19th century and managed to keep relatively secret over all those years.

I give credit to Dr. Pierre Ramond, who was the first to publish plans and explain what this tool did in his ground breaking book, "Marquetry," printed in English by Taunton Press in 1989.  Even though there was a French edition of this book published in Europe years before, it was the Taunton Press edition which first hit the American market big time.  This edition is now out of print, and the Getty Press reissued the same volume with a new cover and some added photographs in 2000, and that edition is now also out of print.  Fortunately, we have the internet and book search engines.

I began making and selling hardware kits and blueprints for a chevalet when I opened my school, the American School of French Marquetry, in that same year, 2000.  Many of my students purchased kits and went on to build their own tools, and those tools have encouraged other woodworkers to build their own versions.  As this tool gains acceptance in the marquetry world (admittedly a small world), I get calls and emails asking about how the tool works and to explain certain features of the tool or explain some obscure detail of its operation.

The initial problem is that it is usually the case that the builder has never used this tool and won't realize what parts of the build are important until he uses it.  I did this on my first tool, which I built in the 1970's.  After spending time in ecole Boulle and learning more about it, I modified that first chevalet several times.  It had so many changes that, today as it sits in my school, it is named "Frankenstein."  (By the way, Frankenstein swings both ways, right and left handed!)

The biggest problem I have in discussing this tool with someone is terminology.  What are the parts named?  In Pierre's book, the cut list for the plans include generic English translations of the names, which are sometimes confusing.  Therefore, I propose to create some terms here for common usage, so that when others ask me I know what they are referring to. 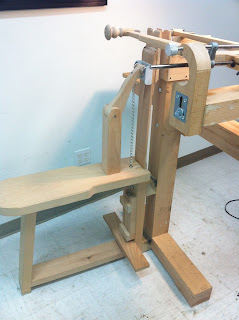 There is really no problem with the names of the lower half of the tool.  You can see the seat, which has a front and back leg, as well as a foot pedal.  There is also a lower stretcher and a large foot or base which stabilizes the structure.  Mounted on the seat, in front of the worker, is the vertical column, which supports the pressure arm.  This pressure arm is connected by a chain to the foot pedal which moves up and down and clamps the vise on the packet.  Note the foot pedal and the top of the base in front of it should be level when compressed to avoid foot fatigue. 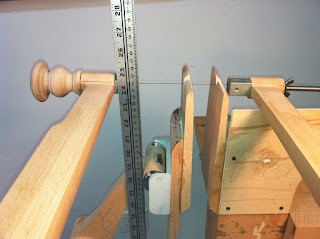 The first thing a builder needs to consider is the size of the chevalet.  Workers traditionally made their own tools to fit their bodies for comfort, like a custom bicycle.  The turned knob on the saw frame should rest at about the same height as the base of the neck of the worker, when sitting on the tool.  Therefore the tool size is measured from the top of the seat to the saw blade, in metric length.  This tool is a 62cm size, which is tall and should fit a normal person about 6' or so, depending on his upper body height.  Note that the actual size can be changed slightly up or down by changing the replaceable vise faces, which are either glued or screwed in place. 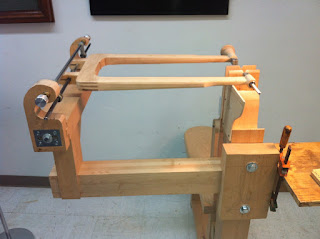 Here you can see the horizontal arm which supports the saw guides.  This arm can be moved in or out for different size saw frames.  Normally a worker builds at least two saw frames, medium and large, and changes them depending on the work.  Note also that the saw frame is essentially horizontal to the tool, and the blade axis and the sliding rod axis are co-planer.   We usually clamp a piece of wood on the arm to hold our working tray (right side of photo).  Note that placing your coffee on the arm will result in a wood dust flavor. 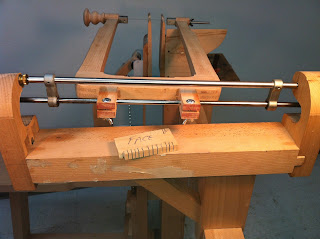 This  is the important part of the tool, which was added to the basic Roubo "donkey" at some point still not fully researched.  In other words, Roubo shows the tool with a seat and foot clamp, but  the saw is hand held.  At some point, certainly by the early 19th century, probably earlier, the arm was added to support the saw frame guide, with its adjustments.  This modification took a good idea and made it perfect for the job.  Cutting absolutely perpendicular is an essential feature of French marquetry, and this saw guide allows for that to happen.  There is a short upright post  on the horizontal arm which is connected to a guide support cross member.  On one end (the left side) of this cross support member is the vertical adjustment element, and the other side (right end) has the horizontal adjustment element.  Both of these elements work together to hold the metal sliding saw guide in place.

The saw is attached to the lower rod of this guide and the upper rod has sliding bushings attached to it and swings back and forth on the pointed screws which hold it at each end.  On this support cross member I have placed a sample piece of wood which we use to test the accuracy of the alignment.  Note the keyhole pieces which have been cut in this wood, proving the adjustment is correct. 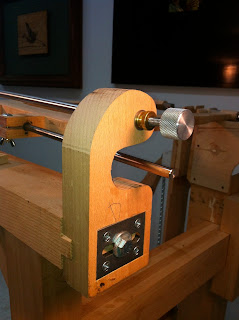 This is the horizontal adjustment. 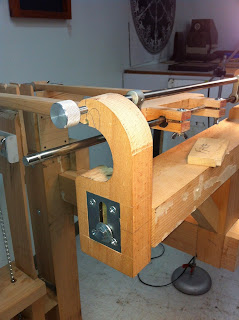 This is the vertical adjustment.  It has been modified to gain more height, as the tool ages and the wood moves, it is often necessary to raise this arm. 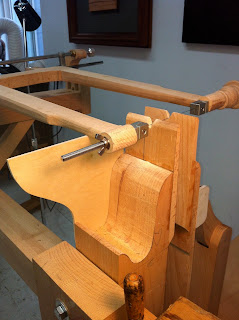 Here we see the cutout in the upright leg which catches parts sometimes.  There is a plywood attached to one side which supports the saw frame when not in use, or changing blades.  The two vise faces, with the "V" notch are replaceable, as they are often cut up during work. One fact which is not obvious is that you adjust these vise pieces to meet around the "V."  Use a piece of paper clamped in the jaws to adjust the pressure.  The paper should be tight around the "V" and loose on either side.  This means the packet will rotate nicely around the blade when you cut.

You can see the custom metal elements to hold the blade, called blade clamps.  These are tempered steel, and the front clamp (where the turned knob is) is fixed in place, while the back clamp (on the left) has a long threaded bolt and wing nut.  I designed this back clamp to slide in and out by supplying a brass "U" sleeve.  This sleeve is put into the wood saw frame, with a press fit or a bit of epoxy and it allows the clamp to remain in position for using different blade lengths.  We use German blades which are 16cm long.

Note the turned knob is only for pressing against the shoulder when tensioning the blade.  The worker holds the saw frame near the knob on the flat part of the frame when sawing. 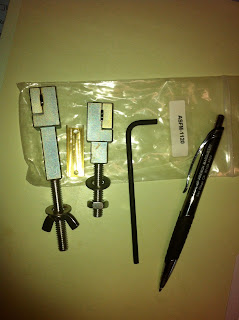 This is a set of saw clamps.  You can see the brass sleeve.  I sell these as a single package for $150.  They are tempered steel and include the wrench.  I also sell the complete hardware kit, which includes all the metal elements for a chevalet and a set of full scale blueprints for $500.  Believe me, selling these kits does not make me rich.  I am just happy to make the technology available.  I hope this post answers some questions and if I missed something, just let me know.
Posted by W. Patrick Edwards at 10:37 AM

Thank you Patrick, for providing a good lexicon for the chevalet. The device is a joy to use and surprisingly fast once you adapt to it. As you know, having fussed with our home built version "demi-chevalet" for some years now, I can attest that your price for the parts and plans is a bargain!

Excellent post. I've never used nor seen one in the flesh but this sure helps with the visualization process of the how it all works.
Thanks
SFPaul

Thanks Patrick. I am making a jewellery cabinet with a marquetry door on it and had intended to sub contract out for this to be laser cut. In a recent Furniture and Cabinetmaking magazine there was an article on how accurate these tools are to cut marquetry so I have decided to make my own. I know that this would not have been possible using the F+C article alone and your advice has been invaluable to avoid the pitfalls from the metal work side of things. I would have purchased your metal kit but you live across the lake.

Thanks again yours David