Many, many years ago I worked in the garage behind my house.  I know this is not unusual.  It is a real pleasure to get up, eat and walk out the back door to work.  I share this happy activity with many fellow woodworkers who have the shop near their house.

When the kids got too big for the house, we had to move, and, through some lucky act of fate, found a larger house in the same neighborhood.  This neighborhood is a historic node of Craftsman houses on the edge of Balboa Park, and the business district where my shop is located is the first urban shopping district located East of downtown San Diego.  Every day, as I walk to work and home again, I search out the date stamps in the sidewalks, ranging from 1909 to the 1920's.

Honestly, I know this is not "old" when compared to Boston, New York, or any European city, but, in San Diego, this is ancient.  Remember, the motto of this city is "City in Motion."  That doesn't emphasize where we were, but rather, where we are going.  I prefer to focus on the past, even though it is fairly recent.

One result of this philosophy and/or lifestyle of living in San Diego is a lack of concern for antiques in general.  First of all, the kind of antiques I work on came from the East Coast or Europe long before San Diego built its "new" downtown during the 1880's.  Before that it was mostly a small village of Spanish, Indians and Sailors who called this place home.

The reason I mention this is that I find that the residents of San Diego can sometimes be rather insensitive to the way they treat nice antique furniture.  I am trying to be nice, but I have seen real criminal activity in my time, real "crimes against antiques."

Take chairs, for example.  Chairs are one of the most difficult objects to design.  They must be stylish, fairly light in weight and construction, and yet hold up under huge stresses, as overweight people twist and turn and lean back after dinner.  This is under "normal use."  When actual destructive criminal intent is the goal, they end up in the dump.  I wonder how many chairs have been destroyed in the past century alone.  I'm not even talking about floods, fire and earthquakes; just ignorant human activity.

Here are some examples I have found just walking around the neighborhood.  Usually, I don't go out of my way looking for garage sales, but, when it is on the way to work, I sometimes stop for a few minutes.  After all, I have to walk 6 blocks each way.

One day I happened upon a young guy sitting on his porch working on this chair: 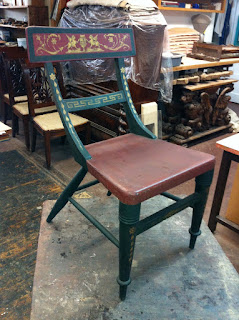 I instantly recognized an iconic Klismos chair made in Baltimore during the 1820's and probably by John and Hugh Finlay, famous chair makers at that time.  In fact, it appeared to me that it still retained all of its original surface decoration, including the gilt stenciling.

Except the top crest.

As I watched, he was aggressively sanding away the flat decoration on the crest, using 80 grit sandpaper and a pad.  I ran across the yard, yelling for him to "Stop!" He looked up from his work and asked me what I wanted.  I asked him what he was doing.  I might have used a swear word.

He said he was going to refinish the chair and sell it.  For $20.  Fortunately for the chair and the history of chair making, I had $20 and was able to rescue the poor chair from a fate worse than the dump.  I restored the crest and now the chair once again stands as a proud example of American glory in the early days of our history.

On another day, walking a different rout, I came upon a sale which, for some reason, made me stop and look.  It was strange, as mostly there was just junk and old clothes.  But, as I reached the end of the drive I noticed a paper grocery shopping bag full of old sticks of walnut.  A single bag on the ground.  Looking in more closely, I noticed chair legs, aprons, crests, and other parts of walnut chairs, all broken up in pieces.  I asked the person in charge what it was and he said, "There are 5 chairs in there.  I broke them up so someone could use the wood, perhaps for fire wood or something."  Again, I might have used a bad word.  I did have the sense to ask if he kept the seats, and he pointed to the trash can nearby.

I gave him $40 dollars and walked away with 5 New York walnut gothick side chairs from 1840.  In a shopping bag.  Did I mention that what I find is considered criminal?

After putting the chairs back together (I actually had all the pieces!), I eventually sold them to a collector who really appreciated them, and forgot about them.  That was about a decade ago.   This week that same collector walked into my shop with this chair from that set: 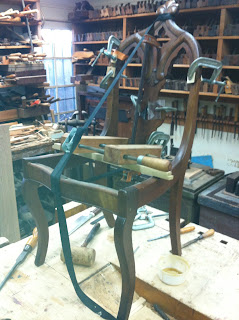 I examined it and found that it had broken in some new places and a few of my old repairs.  She told me that it had been knocked over backwards and broke.  She also said that they were in daily use and none of the chairs had broken until this accident.  This is the kind of feedback a chair repair man likes to hear.  Also, she had the good sense to bring it back to me instead of asking the neighbor to screw or nail it back together.

I heated up  the protein glue with some warm water, scraped the broken joints with a toothing plane iron, added some Old Brown Glue and a few clamps and it now sits on the bench, ready to go home tomorrow.

Score some points for the good guys in the war against the chair.

i always love reading your posts, mr. edwards. the world's a better place because of the few outliers like yourself, saving chairs from...chair-icide????