I just returned from the Woodworking in America Show at the Pasadena Convention Center.  The first thing that comes to mind about the experience is, "I'm not as young as I used to be."

I have never been to the Pasadena Convention Center before.  I have driven by it many times and it looks absolutely beautiful from the outside.  At the risk of insulting someone in Pasadena, I did not find the inside to be as functional as the outside was beautiful.

The exhibit hall where the show was set up had three events at the same time.  Our event was in the center room.  On one side was an event featuring Japanese food and drink for most of the Japanese population of the West Coast.  On the other side was a wedding which must have cost some poor dad a million dollars, and essentially shut down Colorado Avenue for the day.

There was no bathroom in our hall, so we had to either walk through the Japanese event or the wedding event to find comfort.  In either choice, I think we stood out from the crowd.

For delivery and set up, we had to go down a long ramp and into the dungeon basement of the center, where large people who never see the sun toil endlessly loading, unloading, moving, dumping, and just moving around from one locked door to another.  We never found two of these people who agreed about any of the rules.  Either they didn't know, or they just find it sporting to contradict the information the last person gave out as the way things are done.

My wife disappeared for a long time to find out who was actually in charge and came back with the news that she had talked to "Shack" and he said just do what we wanted, park where we liked, and, if anybody asked us what we were doing, say "Shack said it was fine."  That particular bit of information saved our ass on several occasions.

We set up our booth and went to bed at the hotel, ready to start the event on Friday morning, bright and early.  Our booth was in the back corner, way back in the corner, away from most of the action, and we liked it that way.  These shows rely on tools.  Lots of tools.  The kind of tools that plug in and require a small nuclear reactor to power.  They make a lot of noise, and dust.  It is difficult enough to talk in a cement room which has 30' ceilings, industrial air conditioning and walls that are cement, but when you add a few stores of power equipment...well, I will just say that it is not like standing at my workbench.

At one of these shows, we actually had a booth directly behind our curtain which was selling planers.  All during the event, we would be standing with wood shavings falling down on our heads like snow.
(I accidentally unplugged their booth a few times while trying to plug in my coffee maker.)

We were relieved to find at this show that the booth behind us was set up for the "Modern" woodworker (whoever that is) and remained empty during the show, except for some cards on their table.  I still ended up loosing my voice after two days of talking.

Not everything was bad about the show, I need to add.  Many years ago I did these shows more often, and it gave me an opportunity to meet and become friends with the outstanding woodworkers in America.  So I was pleased to have the time and chance to meet many of them this weekend, and, like old friends do, discuss the state of the world and the news from our business.

People like Christopher Schwarz, Paul Schurch, Adam Cherubini and Roy Underhill have all influenced my work and encouraged me by their creativity and knowledge.  If it wasn't for these shows bringing them all together, I would never get the chance to see them.  In a very real sense, we need each other.  Together, we have devoted our lives to a career in a special aspect of woodworking, and are truly keeping alive the spirit of craft in the modern age. 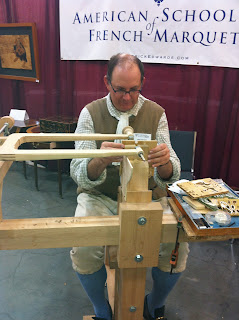 This morning, as I recover from the physical effort, and the late night drive, the fresh memories of seeing good friends wash over me, and I know that it was important to make the effort, not so much for those who visited me at the show, but for me, personally, to remember why I do this.

This is hilarious. I so know the no two people could agree on the same set of rules comment.
SFPaul

I'm glad you were at the show, Patrick. I really enjoyed talking to you about glue and learning something new. I had used rabbit skin glue for making gesso for traditional wood panels for painting but had not used hide glue for wood. I bought some of your glue and even had a pot to put it in, an antique I picked up for a song at a junk sale. My boyfriend (who I dragged with me to the show) enjoyed talking to someone who knew physics, so I was able to stay at the show a little longer because he wasn't bored at your booth. We both also enjoyed trying out the chevalet; it was the first time that marquetry piqued my interest. So keep going to shows, your presence is appreciated.

Thank you. I remember talking with both of you. It is an interesting intersection of woodworking and physics. Last week I received an email from a physics professor at a noted college on the East Coast. He wanted to know if he could use the photo of me as a very young boy holding a hammer and nail. I posted this on my blog. Search for "Boy With Hammer."

First question I had was, "How did you find this photo?" and he said "I just Googled "Boy" and "Hammer." It never occurred to me to search online for those terms, but there I was!

Then I asked, "Why?" would he want to use my photo in a physics lecture? He said that, in his experience, particle physics experiments were all basically the same: smash it and look at the pieces. In fact, he is right.

The final part of this amazing intersection of physics and woodworking craft came when he actually looked at the blog and discovered my background in particle physics!

I now look back at that picture of me, as a 3 year old boy holding a hammer, and wonder what I was really thinking?

Thanks for the kind words.