I love clocks.  Not just all clocks, although I think they are amazing, but specifically tall case marquetry clocks. Imagine what kind of mental gymnastics it takes to figure out the drive train sequence, forces and speed necessary to transform a weight into a measurement of time passing.  The history of time keeping is full of creative methods for measuring time, from the sundial to dripping water.  To me, the Golden Age of time keeping was the last half of the 17th century.

It was Christiaan Huygens in 1656 who perfected the pendulum clock and transformed our estimation of time into a more precise system of measurement.  The pendulum is simple and effective.  Think about how accurate you can make it.  By adjusting the bob up and down as little as a millimeter, you can change the speed of the movement by several minutes a day.  It is so sensitive that moving a pendulum clock from the North to the South requires an adjustment to keep the time constant.

Clockmakers were a special breed, as I said.  The story of the first clock to be used successfully at sea, made by John Harrison in 1736, is a story that represents how interesting these people were.  John was self educated, and not an accepted member of the guild of clockmakers at that time.  He was a carpenter!  However, he solved a problem which had stumped all the other clock makers of his day.  His invention changed the world, but he had to wait years for recognition and awards.

My favorite period of clock design was during the last two decades of the 17th century (1680-1700).  This period was very creative and there was an emerging merchant class in England and Europe who appreciated the status and practicality of having a clock in the house.  The general design of the cases included square brass dials and elaborate marquetry cases, often with  exotic materials.  I have made several of these clocks and spent a lot of time on the internet looking at others and I never get tired of seeing them.

Some time ago a client brought in a tall case clock for analysis.  In general, most clocks I see are (unfortunately) marriages of works and cases, and this clock was no different.  It was a Georgian case which had had the lower section remade with very poor workmanship.  The brass works were earlier and some person had added a fake brass moon dial to the top to fit into the case.  Essentially, the only value was in the works, so I was able to purchase the works at a reasonable price and the case went away to its fate.

The works were made by Daniel Lecount, and signed London.  The most amazing thing is that they were completely original and unrestored.  It seems that the owner of this clock had owned it for some 50 years and never ran it.  He was missing the weights and never thought to replace them.  So it sat.

Daniel Lecount was a French man, who was a member of the Haberdasher's Company and relocated to London, where he was "made free of the Company 29 September 1676."  That is, he was accepted into the Worshipful Company of Clockmakers in 1676 and remained in that position until 1693.  He was most well known for his watches, but he made several tall case clocks as well.

At that time, the clock makers usually did not make the cases.  They would make the works and then hire some local cabinetmaker to make the cases.  That accounts for the wide range of quality and design  that you find on these cases, even for the same maker.  During this period the major influence on case design was the Dutch influence on the marquetry.  The general method used was Painting in Wood, and the veneers were sawn from a wide variety of imported exotic species, newly discovered in the far reaches of the world.  Oyster and sausage cut veneers were common as well as tinted bone and horn.

Here are some images of the works.  It is interesting that the dial is 11" square, and not the common 10" that is on almost all the clocks from this period.  All the parts are original and unrestored. 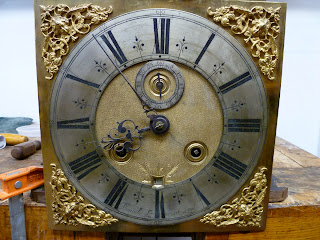 Here is a shot of the works, which still have the old catgut cables.  Note the fake brass moon dial attached to the top, which has been removed. 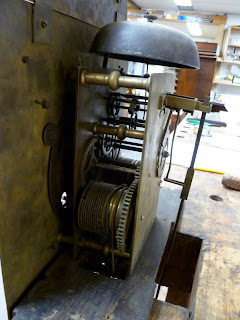 After looking at several documented clocks made by Lecount, I selected one which I like.  I have been working this week on the drawings for this case, and the drawings for the marquetry.  I have decided to use sawn olive for the primary groundwork, with yew oysters on the door background.  I really like the boldness of the spiral carved columns and the little touches of gold leaf on the capitols, bases and lenticle surround. 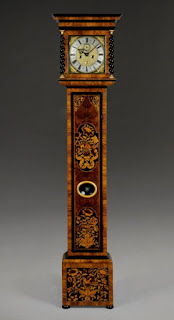 Here a close up of the bonnet. 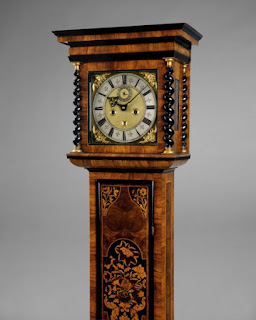 I will post on this blog, from time to time, as work progresses on this project.  It will be a happy day when Mr. Lecount's masterful clockworks are housed in a case that is more appropriate and historically accurate.

By the way, I know that there are people out there who know more about clocks than I do.  If any of you have more information on Daniel Lecount and his work, I would appreciate knowing about it. As usual, time marches on.

Mr. Edwards, I am new to your blog, and you can't imagine how happy I was to see this particular project. I am a clock collector, and I have plans to build a similar clock (though I haven't decided if I want a full ebony style case or a marquetry case). You were very lucky to come across such a nice early movement. Many of the older ones are 10", but 11" dials are also quite common.