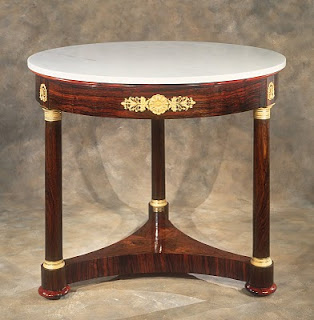 When you look at the last 50 years of collecting American antiques, you must appreciate the influence Jackie Kennedy had on our generation. When I say "our" generation, of course I refer to the Boomers. As I was born just after the War, I have lived my life along with a herd of others, always hearing about the Baby Boom and its impact on everything from Rock and Roll to housing costs.

Before Jackie walked into the White House, antiques were a dusty relic of rich "old money" families. Stuff that had always sat in the unused rooms of ancient mansions. Remember, before 1966 antiques were defined as "made before 1830" and who could afford those things?

However, when Jackie decided to decorate the White House with American antiques, it caught the attention of everyone. All eyes were on her efforts to draw attention to the culture and craft of early America's past. For the first time in my young life, I started to focus on furniture and Decorative Arts as something interesting, as well as the history behind their creation.

My family took a trip to Washington, D.C. during this time, and I was lucky enough to tour the White House as a teenager. When I walked into the Blue Room I fell in love with everything I saw. And right in the center of the room was this round marble top table with a dark mahogany skin that reflected the light like a beautiful girl laying on the beach covered in sunscreen. Little did I know that, much later in life, I would have a mid life crisis that required me to make that table.

I have already talked about my success in veneering columns. It was a simple decision to make this table, since most of the work was making the three columns. The bronze dore mounts were ordered from Paris, along with the capitals and bases for the columns. I spent thousands of dollars on the mounts, choosing mercury gilding and chasing by a Parisian expert who had graduated from ecole Boulle. The rosewood was veneer I had kept in my veneer cave for years. The polish was French polish, which takes some time to do properly.

The real difficulty was in turning the molding around the top under the marble. The only machine I have in the shop is a 1952 Shop Smith. I purchased it when I started business in 1969 since I thought it was a good lathe. I threw away all the other attachments since I had no use for the jig saw, table saw, disc sander, etc. I just wanted a good, cheap spindle lathe for making parts. I kept the face plate attachment, which was 4" in diameter.

Now I needed to turn a cocobolo molding which was over 3 feet in diameter! I was filled with the challenge and a good helping of respect and fear for my life. I used cocobolo since I did not have enough solid rosewood to use, and I thought cocobolo would be a close match in color and grain.

I made a plywood circle and bolted it to the 4" face plate. I turned the Shop Smith motor and head around to turn outboard, so the large plywood blank would just clear the floor. I loaded the bed of the Shop Smith with as much weights as I could find, several hundred pounds. I mounted a tool rest on a stable bench just near the edge of the turning. I glued the cocobolo segments to the edge of the plywood and went home.

I could not sleep that night.

When I approached the lathe set up the next day, I said to myself "What was I thinking?' I even went so far as to put protective barriers around the lathe so that if (when) it exploded it would minimize the damage to the room. I put on lots of clothing to protect myself and flipped the switch. Long before the spinning plywood reached full speed I turned it off. As it slowed down I pressed a chisel against the edge and began to smooth it down. On with the switch, wait 10 seconds, off with the switch, cut with the chisel. Repeat. Each time it got more balanced and I could leave the power on longer.

After a long time I was able to turn it on and leave it on, while standing in the far corner of the room. When it did not explode, I finished the turning. I was covered in cocobolo dust and shavings. Later I found out that some people have a sensitivity to cocobolo dust. I was more worried about dying.

Never again will I do something that foolish. Do not try this at home.
Posted by W. Patrick Edwards at 8:32 AM