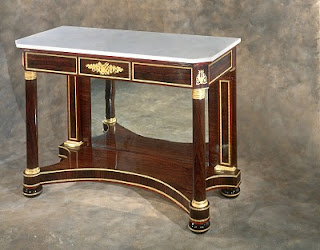 You may have realized by now that I rediscovered a method for veneering columns using traditional protein glues many years ago. It opened a chapter in my career where I found projects which included columns and I could turn those columns from solid wood and wrap them with any veneer I choose.

This was neat. Up until that time, it was not really possible to use a vacuum bag, unless you created a special bag application. You couldn't use synthetic glues or contact glue. Nothing worked easily and with a certain amount of guaranteed success. But using the liquid glue (Old Brown Glue) and wrapping with elastic straps allowed me to create any column perfectly and with 100% success.

In case you are interested in this method, you may visit my website and read the article on my Consulting page. I should mention I have several articles on my site and they continue into more detail than I wish to include here.

I was surprised and honored to receive Best of Show at the San Diego Design In Wood show for my Boston pier table, mentioned earlier in this blog. As I had sold it, I thought that I should make another, with some variations in the design. I knew Stuart Feld, at Hirschl and Adler Galleries in New York, and showed him a photo of my table. He was kind enough to compliment me on my work and supplied me with a 1960's black and white photo of a different table they had by the same makers.

This second Emmonds and Archibald had very similar features, including the black ovoid feet, but the mounts and detail were more refined. Also, the mahogany veneer that the Boston Museum of Fine Arts table was covered in was instead Brazilian Rosewood. Because the veneer was different, the black marble was changed to white marble.

Dalbergia Negra (Brazilian Rosewood) is listed on the CITIES endangered species list, and, since 1986, has been a controlled material. Fortunately, I have anticipated this and managed to collect some very nice rosewood prior to the restriction. Since 1986 I have continued to purchase this wood when it has become available, but only from certified dealers who can provide proper papers, like Patrick George, in Paris. For example, the rosewood veneer I used on my tilt top Louis-Philippe tables was harvested in 1952 and sold by George with full documentation.

Building a console table is relatively easy and profitable, assuming you can veneer columns. Essentially, you need 4 feet, a veneered plinth, columns, pilasters, antique mirror and frame, top apron frame and marble. Fast, elegant, practical and a necessary element of classical interior architecture. A perfect place to show flowers or sculpture, often situated in an entry with a second mirror directly above. These tables are called Console or Pier Tables, depending on the country.

I went to Paris and selected some wonderful gilt bronze mounts to show off the rosewood. Much of the time building this table was spent cutting mitres on the bronze molding which seems to cover every edge of the table. For the larger, decorative mounts, and the capitals and bases, I paid extra for chasing and mercury gilding. People who study French furniture appreciate the quality of the mounts, and look closely at the work involved in making them look like jewelry. You can purchase a bronze mount "brut" which is simply cast, and unfinished. Such a mount might cost less than $100. You can the select the type of gilding, which is either electroplate or mercury. That can add a cost ranging between $100 and $500. Then you can have a master use punches and small chisels to chase the detail further. This is the most skillful part of the job. Each element of the bronze is enhanced and refined with these tools so that the mount shines in the light. That can add as much as $1000.

On this table, I paid for all of that work, and it made this project into a masterpiece, in my opinion. However, it did not influence the judges at the next Design In Wood show, where this table received a second place! I asked the judge after the show about how he could give me a Best of Show earlier on a table which was not nearly as nice as this entry. He replied: "I want you to do something different. I already saw this table last year."

Kind of like the Shakers, who would approach a clockmaker, gaining a reputation for his excellent work, and tell him that it is time he learns how to make bricks. You can never master humility.
Posted by W. Patrick Edwards at 8:05 AM