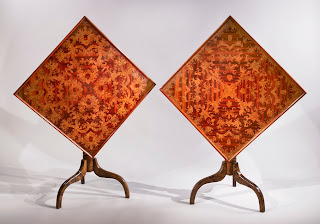 One day I was looking through a magazine and saw an add for a hotel in Hawaii. The graphic used in the ad was an antique Hawaiian quilt. I was fascinated by the design, and the more I looked at it, the more creatures appeared.

There were frogs, dragons, bats, pineapples, and other mysteries contained in the repetitive pattern. In addition, the balance between the design and the "negative" space of the background was almost a perfect 50/50. This meant that it would be a perfect design for boulle cutting in two materials, since the "premier partie" and the "contre partie" would be relatively equal.

The other aspect of the design was that it was made with scissors and sewing, so that the pattern was slightly irregular and primitive in origin. I thought it would be interesting to execute that design with wood, so I copied it and went to work.

In selecting the two woods for this project, I wanted to make it as challenging as possible, so I could have some fun. I selected a walnut burl and padauk. The burl was difficult to control, as it was fragile and would expand in the glue, testing my speed at putting the picture together on the assembly board. The padauk had a very strong straight grain and would easily break if poorly handled.

More importantly, the matching of the padauk would provide a certain depth of field or perspective in the final picture, as the linear grain would create a tunnel effect. Of course, the bright red of the padauk would not last long, and over time it would fade to almost the same color as the walnut. I thought that would also add a certain charm to the picture, and it did.

As you will note, making the top was fairly efficient. The top is made up of 4 identical squares and each is made up of 2 woods. All I had to do was make one packet with 4 layers of burl walnut and 4 layers of padauk. Using the chevalet I cut all the design out with a 2/0 blade and I got 8 times the surface area. Thus 1 square foot of packet makes 8 square feet of design.

I glued the two assembled marquetry tops to a maple top and turned some Federal tripod bases. I really did not spend much time working on the bases, as I just wanted to use the tables around the house as occasional tables and, when not in use, they would rest upright in the corners of the room. For contrast, I used solid padauk for the frames of the tops. I gave the bases a dark finish to make them appear older than they were. The maple had a wonderful figure which the stain made stand out.

I think when you look at the two tops you will see images from the Hawaiian tribes, transferred from fabric to wood.
Posted by W. Patrick Edwards at 1:57 PM