One of the best decisions I ever made was 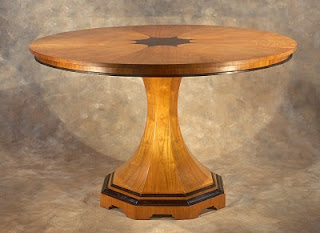 to hire a professional photographer to record my work. A close friend of mine recommended Glenn Cormier, who was famous for his commercial interior work. Glenn would take a restaurant or home interior and light it perfectly. That meant that everything looked "natural" but all the lighting placement was intentional and artificial. He studied at Rochester Institute and learned about "Painting with Light," a special technique used by many photographers to put the light where it works, and use the shadows for dramatic effect.

I contacted Glenn and asked him about his schedule and prices. To say he was expensive is an understatement. He was also busy. That made it difficult, as I would usually finish a project the day before it was to be delivered, and he was not always available. So, in addition to my work schedule to complete a job, I had to project the timeline to include his possible openings for shooting the work.

As for the cost, I simply included it in the final costs for the job. Since most of the work I made was fairly expensive, it did not increase the final price much, and having a quality portfolio of work paid off in the end. My prospective clients would always be impressed when I showed them my folio, and I think it was as much for the quality of the photos as the work itself.

After years of working with Glenn, he asked me to make him a dining table. Finally, I had something to trade with him, to offset the costs of all these pictures he was taking. He told me about the size he wanted and the style and I set to work.

I used the basic form of my Butterfly Table, except the proportions were different. The Butterfly Table is a center table, so it is a Console table height: 32". Dining tables must be as close to 30" in height as possible, not more than 1/2" above or below for comfort. That meant the shape of the pedestal was modified for the lower height.

The top was also much larger: 54". On a circular table this size would seat 6 people comfortably. But I also wanted the top to be stable when used. To guarantee this, the footprint of the base would need to be 2/3 the diameter of the top. This would also allow space for the feet when seated at the table.

Finally, to insure a stable top, I engineered the following attachment, which would make it extremely stable when assembled, yet allow for the top to be easily removed when necessary. I took a 1/4" piece of steel, 12" x 12" and had a large nut welded to the center of it. This piece of steel was glued into the center core of the top itself. The top was made with veneer on top of 1" wood, the steel underneath, and 6/4 solid wood under that. It looked like a solid wood top in all respects but underneath there was a hexagon hole in the center of the table where the steel plate and nut was visible.

To install the top you placed the top upside down on a blanket, located the pedestal into the hexagon socket and installed the bolt from the bottom, through the pedestal, into the nut. When tight, the top was absolutely rigid and stable, but could be easily removed by reversing the process.

Finally, I added a nice black veneer star in the center of the top, and some black trim as an accent to the cherry. This touch is common in Biedermeier design to add detail and contrast with the lighter veneers.

Glenn was very pleased with the result, and did not charge me for the photograph.
Posted by W. Patrick Edwards at 12:36 PM