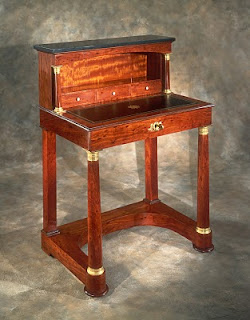 I love the Empire style of furniture. It is strong and clean in line, classic in ornament, rich in wood and was popular all over the world for nearly the entire 19th century, in one form or another. There is one problem: it doesn't live well with other more delicate periods of style. It fights with all the French Louis, doesn't live happily with lesser woods (like oak) and cannot stand small rooms with no architectural character to feed off of.

Early on in my collecting, I resolved to purchase a nice early secretaire abattant, in mahogany with black marble top. I searched for years, always finding some reason to not purchase each one, since it had some flaw or weakness (in my opinion). There was a dealer I knew who loved chinese porcelain and hated Empire furniture. As it happens, he had a great secretaire abattant which he considered useful strictly as a pedestal to hold his prize porcelain bowl. The bowl was easily as large as the entire top of the cabinet, and it sat there untouched year after year.

He refused to sell the cabinet as long as he had that bowl.

One visit, I noticed with glee that the bowl was gone! I gingerly asked about the secretaire and he said he would sell it for $600, but that it was not French, but German. That day was the last day I could pay my property tax, and instead of paying my tax on time (and instead of consulting my wife, which is worse) I took the tax money and bought the cabinet.

As he was helping me load it into the truck, I was lifting the top and he was lifting the base, and he said with a surprise, "Hey, there are paper labels under the base!" I asked what they said, and he replied, "Don't know, they are in French."

As I enjoyed living with this secretaire, the desire to do similar work grew in my mind. "What if I could do work as nice as that?" I thought. Perhaps then I could call myself an ebeniste, I reasoned.

Years later, at another dealer's shop, I stumbled upon a beat up French Empire Bonheur du Jour, which I purchased for a lot more money than it was worth. When I got it back to the shop and studied it, I concluded it would be easier to copy it than to actually restore it. That started the journey of fulfillment which led me to call myself an ebeniste.

I have already discussed making veneered columns so this part of the problem was solved. I also had purchased some fantastic plum pudding figure Cuban mahogany from New York 15 years earlier that I knew would be perfect. All I had to do was purchase the bronze mounts from Paris and measure and copy the original which was sitting on my bench.

Everything went much better than I could have expected. There were problems to solve, lessons to learn and always careful attention to detail, and having the original to study got me through. However, when I put it together it looked different, and I spent days looking at the copy and the original from every angle possible to discover what was different.

Finally I realized the problem. The square back posts on the base have no taper to their sides, but the two front turned columns have a slight taper. I had mounted the turned columns vertical, and when you looked at the base from straight on there was a difference with the original. The original had the tapered columns moved a few millimeters out to produce an exterior edge parallel with the back posts. This created an effect in perspective like at the Parthenon where the columns are not exactly vertical. I had been looking at the desk up on the bench at eye level. When you viewed it on the floor, where it was used, and stood in front and above it, the turnings looked perfect!

I immediately moved the turnings out and it solved the problem.

This piece is in my collection and is one of my favorite pieces. It was pictured on the back cover of Fine Woodworking (Issue #173) from December 2004. I wrote a Master Class article with it to instruct readers on how to veneer columns using protein glue. The only response I got from a reader was to ask about where I got the mounts, and did I have plans available?

Bonheur du Jour is translated as "Good time of the day". I must say that this piece does not fight with others, and has lived in my home in peace and quiet for years.
Posted by W. Patrick Edwards at 3:12 PM