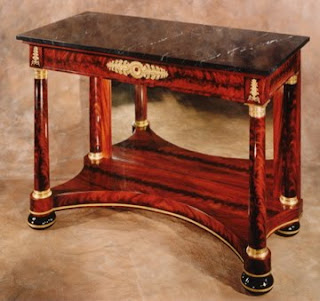 When I started collecting antiques over 40 years ago, American oak furniture was found in the thrift stores and second hand shops for little or no money. I purchased sets of press back oak chairs for $5/each, square and round tables (with leaves) for $50 and nice roll top desks for $200. As the market woke up, prices went up quickly.

There were several factors in the rapid rise of awareness in collecting American antiques. Most importantly, the legal definition of what an antique was changed overnight in November, 1966. That was when President Johnson signed a law which had an amendment changing the legal status of antiques (only for importation into the US) from "made before 1830" to "100 years old". The concept that antiques were made before 1830 was established by the passage of the Hawley-Smoot law in 1930, and recognized that antiques were made before the Industrial Revolution. By 1966 there was a lack of real antiques available, and the antiques lobby (imagine!) added the amendment to include new (Victorian) objects for sale.

This started a rush to purchase the "new antiques" and Belter furniture and Tiffany lamps came out of the trash and were placed into the front showrooms of the best auction houses. Boomers like me were encouraged to jump in and invest in this new market, and I was excited to go on a treasure hunt like others. By the Centennial, I was selling roll top desks for more than $1500 and making a good living traveling the states and spending cash in small town antique shops.

During these "business" trips, I would also visit all the historic homes, villages and museums that I could find. So, on one of these trips, I found myself wandering around the great Museum of Fine Arts in Boston. It was there I met Emmonds and Archibald, "face to face".

This team of cabinetmakers worked together in Boston during the first decades of the 19th century and produced a wonderful series of pier tables, and the Boston museum had on display a wonderful example of their skill. I was struck by the way they were able to veneer tapered columns using protein glues, and I began to research and experiment with this technique to see if I could do the same. Since I knew it was fairly common for furniture makers before the Industrial Revolution to veneer columns, I thought it would be a simple trick. I was wrong.

As a founding member of an international conservation group (ADEN) working on modifying animal protein glues to conserve marquetry surfaces, I learned of the addition of urea as a modifier and how it changes the characteristics of the glue. Without getting too scientific, the urea attaches to bonding sites on the protein molecule and prevents the covalent bonding of the adjacent electrons as the glue cools. This allows the glue to remain liquid at a lower temperature, which allows a longer working time.

I immediately restarted my experiments on veneering columns using urea modified glue, and it worked perfectly the first time. Soon I was manufacturing and selling Old Brown Glue, which is a urea modified protein glue, and now OBG is a staple in many woodworking shops.

The first thing I made using this rediscovered "trick" was a recreation of the same pier table I remembered seeing in Boston. I used old mahogany veneer, antique mirror, black marble, imported gilt bronzes from Paris, and my new glue, and in sort time my wife was placing flowers on our own pier table. I entered it in the Design in Wood show that year and was honored with "Best in Show" and $1000 prize.

Thank you, Mr. Emmonds and Mr. Archibald
Posted by W. Patrick Edwards at 8:26 AM